The Anger Box: A Useful Tool for Controlling Negative Emotions 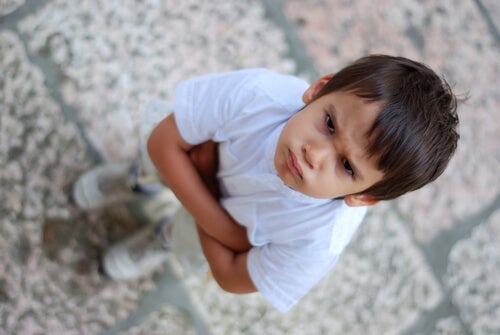 It may be hard to believe, but rage can actually be turned into something positive. An anger box, a tool for controlling tantrums in children, can do the trick.

As a result, you get a child with an excellent conscience and good self-control.

From the age of two, children start to be aware of their emotions.
They recognize their autonomy and want to enjoy it. And when they can’t – be it for lack of ability or lack of permission – these toddlers become frustrated and explode. Any parent can attest to that.
When these little ones lose control, tantrums ensue. Kicking, crying, and yelling come together in an episode whose results will depend on how you face it.

At this early age, little ones have yet to gain control of their emotions.

The prefrontal cortex, responsible for regulating emotions, is still immature. As a result, it’s normal for children to have reactions similar to volcanic explosions.

Parents must equip themselves to deal with these tantrums. Soon enough, your child will be capable of coming to her own conclusions.

If she thinks that tantrums are an effective way of getting what she wants, then she’ll do nothing to avoid them.

The best option is to act immediately, and the anger box will help you meet your goal.

Psychologist Maria Martin came up with the idea of the anger box as a tool for controlling tantrums.

The anger box helps children channel their feelings of anger, one of the emotions that requires the greatest level of self-control.

Anger can be considered a defense mechanism. When a person faces a physical or physical threat, anger arises to destroy the imposing threat.
Analyzing your child’s anger, understanding why he feels threatened, and facing the issue is part of the strategy.

The anger box was inspired by the children’s book “What a tantrum” by Mireille d´Allancé, about a little boy named Robert.

The book tells about a bad day in Robert’s life. At night, after facing a series of negative situations at school and at home, Robert explodes.

A giant monster takes control of him, destroying everything he can get his hands on.

However, Robert starts to reflect upon his actions and decides to fix things. He makes his bed, arranges his books, and picks up the lamps and toys that he’d thrown on the floor.

As he did so, he noticed that the monsters started to disappear and his anger started to fade.

At the same time, he started to realize all the damage he had caused. Now, his anger could fit in a box.

Robert transformed his rage into something positive.

The moral of this story has to do with understanding anger and learning to face it, rather than avoid it.

The anger box as a tool

The anger box is a relaxation technique that helps children understand their emotions through drawing.

It also illustrates the impact their emotions have on them and their family.

After reading Robert’s story, give your child a paper and several crayons or markers.

Allow your child to scribble or doodle, using his impulses as inspiration. He’ll continue to draw until he’s relaxed.

Once your child has finished drawing, it’s time to bring the fun into the strategy.

Ask your child to put eyes, arms and legs on the drawing. That way, the monster will have an identity and your child will be able to recognize the emotion.

When the drawing has these final details, it’s time to crumple up the paper and stick it inside a box. If the box is closed tightly, the monster won’t be able to get out.

The triumphal defeat of the monster

The anger box allows your children to face this uncontrollable and harmful feeling that seems to take over them.

The more they draw, the more the monster will be tamed. This will be a triumph for your children because they’ll have learned to control their anger and defeat the monster.

Each time they feel frustrated or angry, they can draw a new monster and shut him away. Little by little, they’ll regain control and turn their negative emotions into something positive.

With each drawing, the monster will take on new colors and shapes. Parents can observe the different scribbles with their children and talk over what they felt in each case.

Anger boxes are useful tools for anger control. The idea is not to change behaviors, but rather solve unpleasant situations and calm your child.