What is Ankyloglossia in Children? 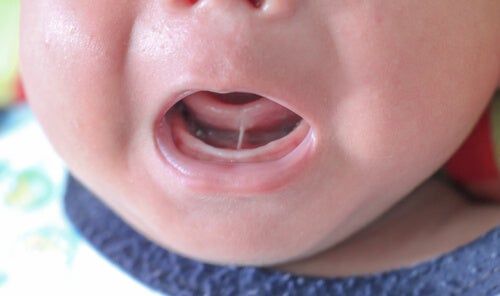 Ankyloglossia is a birth defect which affects the normal movement of the tongue.

This disorder can be detected as early as infancy because of its implications for the baby and also for the mother, depending on the severity.

In time it could also impact language development.

You’ve probably noticed that underneath your tongue there is tissue that functions as a kind of “ligament” connecting your tongue to the inferior oral cavity.

This is known as a lingual frenulum, and its function is to keep the tongue in place. In other words, it prevents us from choking on our own tongue by swallowing it while we’re sleeping.

Keeping the tongue in place not only helps us prevent such accidents, but our lingual frenulum also functions as a gauge for the tongue’s movements, allowing it to move or not move when it is supposed to.

For example, in the case of breastfeeding, the frenulum allows for correct positioning of the tongue so the child can drink breast milk without their tongue falling to the side or rolling inward.

Without this small tissue, breastfeeding would be very difficult for them.

The lingual frenulum is a very useful tissue, but the problem lies in cases where it is too short. This is called ankyloglossia, and it can cause certain difficulties with the normal use of the tongue.

Depending on the severity of the ankyloglossia, it could make it difficult to ensure a child’s proper nutrition during the breastfeeding stage.

It could also inhibit speech development.

How Does Ankyloglossia Affect Breastfeeding?

This disorder affects breastfeeding for both mother and child.

Depending on the severity, the most common problems for babies with a short lingual frenulum are associated with insufficient nutrition, such as anemia, low weight, crankiness, fatigue, and longer feedings, among others.

However, not all infants have these issues. It depends on the severity of the ankyloglossia, and the mother’s level of milk production.

For breastfeeding mothers, the problems are characterized by overexertion and the time it takes for the baby to eat.

In this case, breastfeeding can become painful, and cause conditions such as mastitis or infections such as candidiasis, as well as fatigue due to feeding the baby for long periods of the day.

This may also have a psychological impact on the mother. It could cause anxiety and stress at the time of breastfeeding and feelings of guilt for producing less milk (because of insufficient stimulation from suction).

Eventually, this can lead the mother to stop breastfeeding early.

How Does Ankyloglossia Affect Language?

As we grow, we begin to interact with our environment and this is how the natural process of language acquisition begins.

Children with ankyloglossia experience difficulty making certain sounds. This isn’t exactly related to the articulation of words, which is a common challenge at this age. Rather, it’s difficult to execute certain speech sounds.

Some examples are consonants that require us to touch a certain part of the inside of our mouth with our tongue in order to produce the sound correctly, such as n, t, z, d, etc.

This problem could appear from the beginning of language acquisition.

Yet what normally happens is that even with a short lingual frenulum, the tongue’s muscles and movements adapt to the frenulum’s restriction. And this doesn’t inhibit the production of intelligible speech.

A small percentage of children with ankyloglossia don’t show much improvement in their speech abilities, which means that when they communicate, their words seem garbled or pronounced very poorly.

The tongue can be released to the appropriate degree and it heals during this process, which makes anesthesia unnecessary.

This procedure also makes it possible for ankyloglossia to be corrected in children just a few days old.