Arguing in Front of the Kids Is a Bad Idea

Put yourself in your kid's shoes. How would you feel if your parents had a fight in front of you, even if you didn't know what they were talking about? It's a very distressing experience, one with potentially very negative effects. 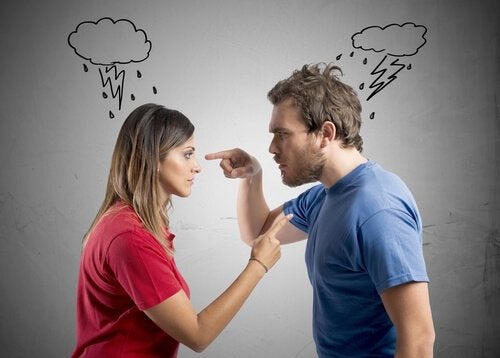 Moments of distress and anger can lead us to make the wrong decisions. In those instants when we’re furious with our partner, it’s possible to forget a very important fact: it’s always best to avoid arguing in front of the kids.

It’s also important to examine how this kind of behavior might affect them. Every couple in the world argues. Even the happiest couples go through rough patches.

These are a necessary part of learning about each other and finding common ground. In this sense, arguing is almost inevitable.

Nevertheless, arguments have a real downside in the sense that we don’t know when they’ll end. We must remember that reason can be cast aside in these moments, especially when they’re passionate in nature.

As a result, arguing in front of the kids doesn’t seem like the best option. If the children are present, it’s best to put your anger on hold and put off the discussion until you’re alone.

As we’ll see, this precaution can avoid significant damage to the well-being of your kids.

Why we should avoid arguing in front of the kids

1. They aren’t mature enough to understand what’s going on

Small children aren’t prepared to confront adult problems. Arguing in front of the kids basically drags them into these subjects, which are in no way their fault or responsibility to solve.

Interpreting the words he or she hears can produce negative emotions including guilt, insecurity, sadness, and fear.

Avoiding arguing in front of the kids will help make their emotional development healthy and peaceful.

It’s not exactly news that kids look up to their parents as role models. What kind of lessons are we teaching them if we argue over a disagreement, even with someone we love as much as our partner?

We need to do exactly the opposite: help them value dialogue, understanding, and listening when resolving disputes. No matter how angry we get, we can’t lose our cool in front of them.

When witnessing arguments between two people as close as their parents, kids can feel obligated to take sides. In these cases, although they may not show it, they may feel very confused by having heard each parent’s version.

These emotions can lead to mistrust and even resentment toward the parents. Obviously, it takes time to repair such significant damage to the parent-child relationship.

The traumatic experience of witnessing their parents argue can make kids feel stressed. As a result, their focus will shift away from schoolwork and learning, which demand their concentration.

Childhood stress can cause physical and psychological symptoms. In addition, it can trigger more severe disorders, such as anxiety, panic attacks, and learning difficulties.

If the children are present, it’s best to put your anger on hold and put off the discussion until you’re alone.

5. It can set a precedent for violence

Unfortunately, we can’t neglect the fact that many arguments lead to acts of violence by one of the parties. In addition to the obvious harm they cause to the victim, few things are more negative for children than to witness such acts.

Not only will we be presenting violence as a way of solving problems, we’re likely producing seriously negative consequences with respect to the child’s mental and emotional health.

Do kids need to see the reconciliation?

Some people also say you don’t always have to avoid arguing in front of the kids. They believe it’s a way of showing them that life presents problems and that things won’t always be perfect.

Obviously, it’s essential to teach them the correct way to solve problems. This has to be based, above all, on respect, empathy, and communication. We must be sensible and prudent when having this kind of conversation.

When it comes time to reconcile, it’s good to emphasize the other parent’s virtues and show signs of affection, such as hugs and caresses.

Once calm has been restored, you can both communicate to the child that you regret what happened, and will try to avoid it happening again. It’s highly important for the child to feel that the family unit is back intact.

In the end, you have to make it clear that this must only happen when we’re certain that the interaction will be successful. Otherwise, the child will be vulnerable to the risks mentioned earlier, which will only be detrimental to his or her well-being.