What to Do If Your Child Talks Back to His Teachers

When there are problems at school because your child talks back to his teachers, the best solution is dialogue and positive reinforcement. Remember, threats and punishment don't make a good path for education. 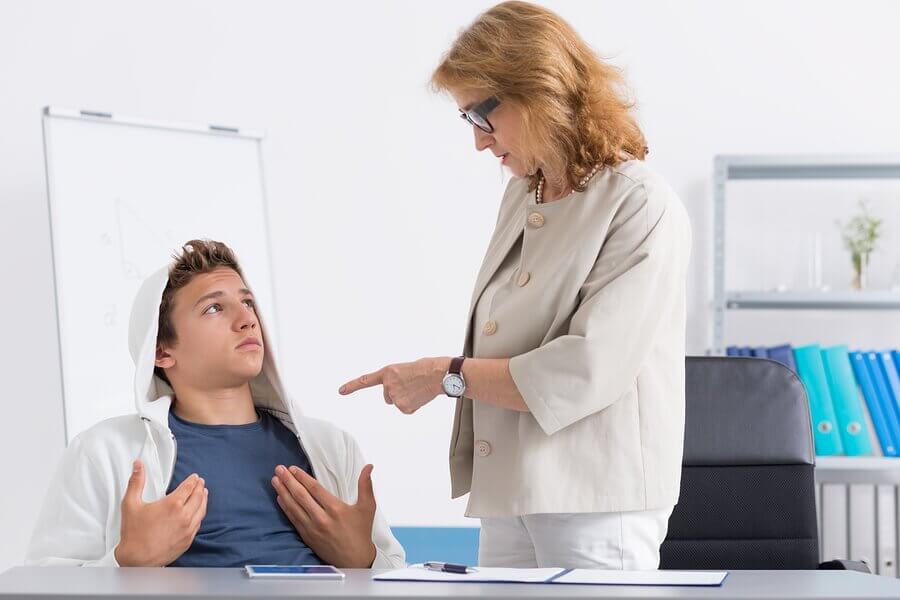 “My child talks back to his teachers” is a common statement among parents. What’s the right way to correct this problem?

Many parents get upset, blame each other, and blame themselves for being too permissive and tolerant. Others think that the problem is with the school and teachers.

There are also those who punish the child, shout and threaten. Really, those methods don’t lead to anything positive. It doesn’t help this situation, nor any other conflict.

Calmness, common sense and patience are the three fundamental ingredients when dealing with this problem.

Parents should accompany their children through each stage of their development. Recognizing the reason why a child talks back to his teachers is the first step to solving the problem.

Why does my son talk back to his teachers?

They also need to feel safe and in control of their situation. In fact, this is because they’re reaffirming their personality.

Young people try to detach themselves emotionally from adults. They want to feel like they’re their own person. They aren’t complacent anymore, and they argue about everything.

With it, talking back arises. In a way, it replaces the tantrums they used to have as kids. They have this attitude without thinking, almost impulsively.

What to know if your child talks back to his teachers

If your child talks back to his teachers, as a parent, you must understand a few things. This reaction is a manifestation of what he’s feeling. It’s not a voluntary behavior. In fact, your child isn’t trying to annoy his teacher or parents.

Although some punishments may help this type of behavior, they aren’t the best solution. Children and teens need intelligent help from adults. Therefore, they don’t need a violent reaction.

It takes time to correct this attitude that affects both parents and teachers. It’s about helping the child or teen think before acting. It’s a path that requires patience and persistence. Above all, it needs a lot of tolerance and love.

“Calmness, common sense and patience are the three fundamental ingredients when dealing with this problem.”

How to handle these situations

All parents want their children to be critical and develop behaviors that are essential for adult life. The goal isn’t to change the child into a submissive person that doesn’t express his thoughts or emotions.

The idea is for the child to have responses and reactions that suit his situation. Additionally, any response to a teacher at school has to conform to standards, no matter what caused it.

When teachers talk with parents because their child talks back, it’s best to avoid impulsive responses. This involves letting go of the inner storm that makes you angry. Rather, sit and reflect for a moment before responding.

If you talk to your child when he’s still angry, he won’t understand the reasoning. Thus, the talk won’t do much good. In addition, he’ll most likely talk back to the parents too.

The tone of the conversation and respect for the rules

In the conversation, make sure to use a friendly tone. That way, your child feels like you’re on his side and wants to help him.

First, you need to ask what happened. Ask what the teacher said or did that triggered the response.

Invite your child to think about other responses he could have had to the situation and reflect on them. The goal is for the child or teen to realize that if he wants to respond, he needs to think first. Then, he can answer with a good attitude.

In addition, the child or adolescent must understand the importance of respecting the rules everywhere. If he’s at school, he has to follow and respect school rules.

Therefore, he’ll understand that disrespecting a teacher isn’t following the rules. Generally, this attitude is punished.

In practice, the most important advice to deal with this is dialogue, empathy, and active listening. With these tools, you’ll be able to communicate more effectively.