Childhood Aggression: How to Deal With It

Aggressive behavior in children can have a number of causes and explanations. In most cases, it's the result of an emotional issue or a failure to analyze their surroundings. Parents play an essential role in correcting childhood aggression. 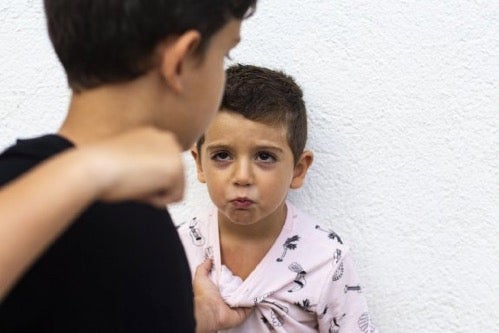 These days, aggressive behavior and violence are somewhat common in everyday life. What is truly concerning is childhood aggression, which has long been an issue among the littlest members of the household.

In this article, we’ll take a look at childhood aggression and how to deal with it.

What is childhood aggression?

This form of behavior occurs when a child seeks to cause harm, be it physical or mental, to another child, to parents, or to anyone else. It’s generally intentional and manifests in the form of kicking, screaming, scratching, pushing, swearing, and other similar acts.

Childhood aggression can cause problems in a kid’s personal and school life, as well as issues in terms of socializing with others and proper behavior within a group.

Many times, this aggression is an outward indication of an internal problem. It tends to reflect an emotional maladjustment in the child. The emotions that the child experiences are externalized in the form of anger and rage.

How to avoid childhood aggression

Aggressive conduct in children is based on learned behavior, and can be modified with proper treatment. To correct this form of acting out, it’s important that parents and teachers (if it’s an issue at school) work together to supervise the child.

Under no circumstance should physical punishment be used to treat a child’s aggression. This kind of discipline can worsen the child’s behavior.

In other words, physical punishment has the unfortunate consequence of the child imitating the aggression, while also increasing his or her anxiety.

The way to deal with this kind of aggression is to remain patient and consistent at all times.

It’s common for parents to feel helpless when encountering this kind of behavior in their children. However, there are some important steps you can take to ensure your child improves.

This first step is essential in curbing childhood aggression. Each parent needs to identify the problem and understand what kind of aggression the child is expressing.

It’s important to be objective and specific in identifying this sort of conduct. This will allow parents – via the following steps – to be firm in their reaction.

2. Establish the regularity of the aggression

Another fundamental step in the process of countering aggressive behavior is to take note of how many times a week the child acts out in this manner.

In addition, it’s important to identify the situations that trigger the aggression. This way, the causes, circumstances and responses surrounding the behavior can be properly understood.

“Childhood aggression is an outward indication of an internal problem. It generally tends to reflect an emotional maladjustment in the child.”

Once the “hows” and “whys” of these acts have been established, you need to set goals to change the child’s behavior for the better. On the one hand, you need to limit aggressive behavior, and on the other, reinforce alternative responses to each situation.

One way to make this happen is to reduce any contact the child may have with aggressive role models. Parents also need to show their children different ways of resolving conflicts, including talking, reasoning, and establishing rules.

Similarly, setting an example is an invaluable tool. When children see older people solving problems constructively and assertively, it’s easier for them to imitate an appropriate model.

4. Evaluate the effectiveness of the treatment

Once a course of action has been chosen, it needs to be implemented with consistency and patience.

To ensure better results, it’s important to communicate the plan to the other adults in the child’s life. As a result, they’ll also contribute to curbing the aggression.

It’s vital that parents react to childhood aggression with a positive attitude. They need to identify what triggers this behavior, while also trying to improve their child’s conduct through sound practices, conversation, and setting good examples.