Also called Heller's Syndrome, this is one of the rarest childhood diseases. Childhood disintegrative disorder has easily detectable symptoms. Its treatment aims to deal with the child's limited abilities. 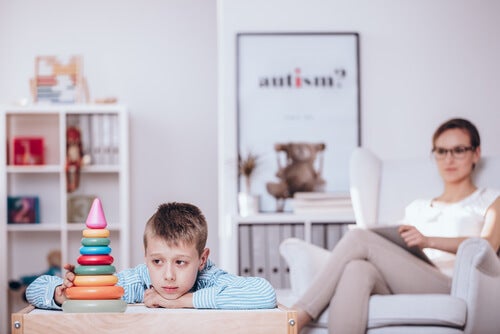 Childhood disintegrative disorder is a rare disease. Austrian psychiatrist Theodore Heller described it as a developmental disorder that affects all areas of life. It causes children to lose abilities they’ve already developed.

This disorder appears between ages 3 and 10. Those who have it appear to grow normally. However, soon you’ll start to see issues with their linguistic, behavioral and social skills. You can even notice a setback in playing, motor skills and potty training.

Specialists consider it to be “a destructive and chronic alteration that can lead to complete dependence.” Some label it as a kind of dementia. This is because it can cause hallucinations or unreal perceptions.

Up to three years old, the child appears to be developing normally for his age. He’s able to explain events in the recent past and make sentences of up to four words. He answers questions and builds his vocabulary.

You can also see progress in his motor skills and independence. He can jump with both feet, eat using a spoon or fork, and drink without spilling.

“The onset of childhood disintegrative disorder can happen suddenly or gradually.”

Socially, he develops just like any other kid. He plays with other kids his age and can identify the important adults in his life.

At three years old or earlier, you’ll start to see the child lose some of his abilities. The onset of childhood disintegrative disorder can happen suddenly or gradually. You’ll notice it more in language. This is because your child can completely lose it, thus preventing him from communicating.

Likewise, the child’s social interactions change and he’ll become less interested in others. He’ll also isolate himself. The child won’t play like before, and will prefer to be alone most of the time.

Additionally, he’ll lose fine and gross motor skills. It will be difficult for him to walk and move around, and he might swing his body more.

At times, he’ll be aware that he can’t do things that he could before. This may cause him to become anxious, restless and hyperactive. He may even feel angry or helpless.

Description of the condition

In general, the symptoms of childhood disintegrative disorder are:

If the disorder affects adults, they’re usually completely dependent on others. As a result, they need constant care, often in special institutions or centers. In addition, they usually don’t live as long as those without the disorder.

There still isn’t a specific known cause. Its appearance could be due to an infection in the nervous system. Going through trauma, either physical or psychological, could also cause the child to develop this condition.

Similarly, possible things that cause it are seizures, tuberous sclerosis, and brain abnormalities. Although we aren’t certain about how it develops, we do know it’s more common in males than females.

There isn’t one single treatment. In fact, there are lots of different ideas about how to treat this condition. Actually, its goal is to make the symptoms better, but not the disorder itself. However, we’ve seen that the child doesn’t fully get the skills back that have disappeared.

The child can get better with therapies, but in most cases, these children won’t be completely independent again.

When the child shows very aggressive behavior, anxiety and depression, doctors will usually give him antidepressants and other drugs for behavior and mood.

“Its appearance could be due to an infection in the nervous system. Going through trauma, either physical or psychological, could also cause the child to develop this condition.”

The medication is similar to the ones that doctors give to children with autism. However, the procedure for improving the child’s brain functioning and behaviors do have some small differences. In general, doctors use communication therapies, special diets and so-called alternative medicines.

We recommend that families get emotional support to work through what’s happening with their child. Staying informed is key to living happy, normal lives.

Its purpose is to give the child experiences that help build his or her communication skills. In addition, teach basic rules of conduct and social routines that are easy to follow. It’s about ensuring doing activities that guarantee the child a better quality of life. Playing with animals like horses or dolphins could also help.

Over time, children with disintegrative disorder may start to do normal activities again. Certain functions may reappear, but only in small amounts, like speech. However, they’ll only be able to build some sentences. On the other hand, their communication ability will continue to worsen.