Understanding Children's Fear of Being Alone

There is a certain age when many children begin to be afraid of being alone. In this article, parents will find tips to help their children confront and overcome this fear. 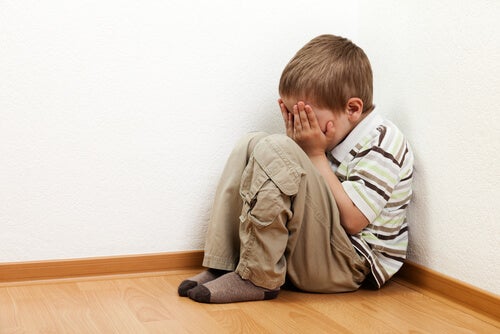 Every day, millions of moms and dads have to deal with their children’s fear of being alone. This is one of the most common fears among children, particularly little ones.

In general, the fear of being alone develops at between 2 and 5 years of age. If families don’t deal with it appropriately, it can have a direct impact on children’s emotional health.

In some cases, the fear of being alone may be linked to fear of the dark and the need to sleep with a nightlight on. It can also appear along with other common childhood fears, such as disguises and clowns.

Whatever it is that our children are frightened of, as parents, we should pay close attention to our children’s fears in order to give them the help they need.

One of the reasons why children may be afraid of being left alone is that they experience the passage of time differently from adults.

We see this, for example, when we promise them a treat: kids ask over and over again whether it is time yet, and don’t take “later” for an answer.

This is because children perceive the passage of time in a different way. For a young child, just a few minutes might seem like ages.

This means that, if a child is the last to be picked up from school because mom or dad is running a few minutes late, the wait may seem to go on for hours.

This may even lead to a panic attack. Some children may have difficulty recovering from this type of situation. They may be afraid to go back to school.

Fear of being alone is normal

Almost every child on earth experiences the fear of being alone at some point during their childhood. This is normal, and should not be a cause for concern.

Children may be afraid of being left alone even when they’re around other people.

For instance, some children may be scared of being dropped off at school, even though they’re surrounded by other children there. In this case, the fear is due to a sensation of insecurity.

Children may also feel alone when they’re playing in their room, even though they know we’re nearby. In babies, this fear often arises when somebody other than their mom or dad picks them up.

How to help children get over the fear of being alone

As parents, one of our tasks is to help our children get over any difficulties in their lives. One of these is the fear of being alone.

However small or insignificant a child’s worries may seem, we should never downplay them. When we dismiss our children’s concerns, the only thing we’re teaching them is that they cannot confide in us.

2. Don’t teach them to be afraid

Some parents make the mistake of making their children afraid to do certain things. For instance, threats such as “if you don’t go to bed right now, the boogey-man will come and get you” create an atmosphere of fear.

Children who grow up in this type of environment tend to be insecure and timid, and have more difficulty facing their fears.

On the other hand, it’s easy to be overprotective as a parent. For example, when our children have a problem at nursery or school, there is a temptation to go in and sort it out for them.

But it’s important to let kids resolve problems themselves. This way, they’ll gain confidence and self-esteem.

Instead of forcing children to confront their fears before they’re ready, ask them to explain what they’re afraid of, and why. Trying to understand their fear of being alone will give you the tools you need to deal with the issue.

When you discuss this topic with your child, make sure to give them your full attention.

This way, your little one will see that you’re interested in their problems. In the future, they’ll feel much more comfortable telling you about the things that happen to them.

Remember, a fear of being alone is perfectly normal in young children. With plenty of help and support from you, your child will be capable of overcoming it.