Five Things That Children Learn From Their Parents

Children learn several fundamental lessons from their parents that will affect all aspects of their adult life. Join us in discovering them. 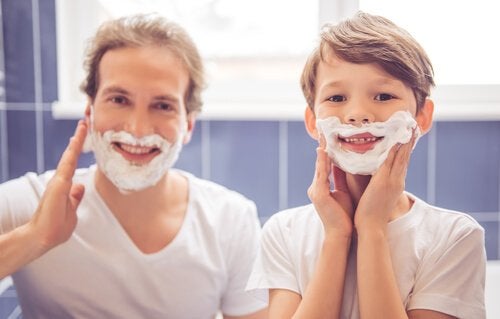 There are five fundamental things that children learn from their parents from an early age that will define their identity permanently. These things are learned by imitating, following by example, and copying the attitudes of their heroes and role models, which is precisely what we are to our children.

Imitation occurs unconsciously and remains rooted in the psyche whether we want it or not. It’s important to clearly understand that if we want our children to be organized, for example, demands will be of no use if we have chaos in our home.

Let’s look at some of the attitudes that children learn from their parents, which generally, no matter how much they change as adults, will remain present in their lives.

Five things that children learn from their parents

We chose these five things that children learn from their parents to exemplify the power of imitation in their lives. These things are order, violent attitudes, being positive or negative, love for study and work, and being fearful.

Being organized and clean is one of the first lessons children learn at an early age. This aspect is so important that even multiple species of animals teach their young how to groom by example since they instinctively relate it to survival or health.

The same thing happens with us, humans – an orderly and clean environment provides health and peace of mind. Children who live in very hygienic and orderly homes show an inclination to keep their things neat without the need to be constantly ordered to do so.

Likewise, they tend to develop an appreciation for their personal objects and those of their classmates or siblings.

Regardless of what kind of civic and religious values you instill in your children, specialists claim that a significant percentage of individuals who respond aggressively had negative experiences in their childhood, where they witnessed physical or verbal violence.

Let’s recall that violence can occur in different ways: children who witness shouting in their home, hear insults, complaints, ideas full of hate or racial offenses, etc. All of them will have a high probability of responding unconsciously and aggressively in stressful situations.

Unfortunately, in cases of domestic violence, many women have said they feel “normal” with their partner’s physical or verbal abuse since they claim they saw their fathers treating their mothers this way. As a result, they too believe that love manifests itself through this duality of treatment.

3. Being positive or negative

Many young children, especially ones between the ages of 4 and 7, have said they feel unhappy or suffer depression.

Without entering psychology and understanding that there are particular pathologies at play, it has been determined that children, prior to analysis with a specialist, tend to repeat statements and behaviors they see in their parents.

All recommendations for good mental health indicate that we should be positive and instill phrases of self-acceptance to our children. Statements like: “We are unhappy”, “we are having a bad time”, “we’re not well”, or “we will never improve” cause children to become insecure adults, without self-esteem and with depressive tendencies.

4. Love for work and study

Love for study and work is the key to succeeding in life. And of course, laziness is the antithesis. When children hear their parents talk about how fun it is to make an easy living, cheating, or seeing them being lazy around the house, it will surely be harder for them to face the responsibilities of adult life.

The same goes for studying and reading. When children see their parents reading the newspaper and books, they’ll feel the need to imitate them and ask for stories or something to read.

On the contrary, in households where television is watched all day, children tend to take passive attitudes towards learning and even their grades are usually lower.

Many times, being nervous and overprotective towards children can inject some degree of insecurity and fear into their character. If we always alert them about dangers or possible problems, our children will feel exposed in any given situation through life.

Another variation of fear is being afraid of the dark or of anything that comes out during the nighttime. By talking about these things, we can mark them permanently.

Our attitudes may have the best of intentions, appear unconsciously, seem imperceptible to our children, but it often isn’t so.

That’s why we must be careful and remember that many of our children’s attitudes will be based on what they see at home, as it’s been shown that children learn from their parents.