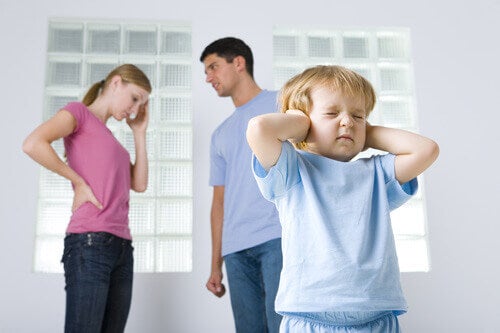 Have you ever asked yourself what happens to children who are part of dysfunctional families? How do they survive and move forward? Here, we’ll tell you about these little ones’ realities.

Dysfunctional families are units in which one or several of its members don’t provide the standards of care, protection, and education that the rest of the people in the group need.

There can be multiple causes of dysfunction. These families typically lack the fundamental psychological resources necessary for coexistence to be possible, so their members encounter numerous obstacles to their emotional and psychological development.

The characteristics of dysfunction closely relate to the problems that cause it, and we can group them into the following:

When a child grows up in a dysfunctional family environment, he or she may end up adopting a specific role that helps them survive and cope with the situation.

The problem is that often, this role ends up extending beyond the family context and into other aspects of the child’s life.

The family is the first stage of socialization for any person. Everything you learn in the family environment will mark you for life.

Some of the most common roles for children within these contexts are:

Resilience is the ability to overcome difficulties and adverse circumstances as they arise. This means working to conquer traumatic situations and achieve stable emotional and psychological development.

The capacity for resilience in children is enormous. They have the ability to face all kinds of adversity, even if the family itself doesn’t provide the necessary resources for it.

So, how do they do it? It’s enough that they find just one person to serve as a base of support.

If within the family there is at least one member who has a functional relationship with the child, he or she will take advantage of that link and build his or her personality by emulating that person’s most positive traits.

However, it isn’t necessary for this person to be within the family environment. At school or in the extended family environment, for instance, children can find an attachment figure to help them rework those acquired patterns of behavior that hinder their growth.