The Reasons Why Children Throw Tantrums 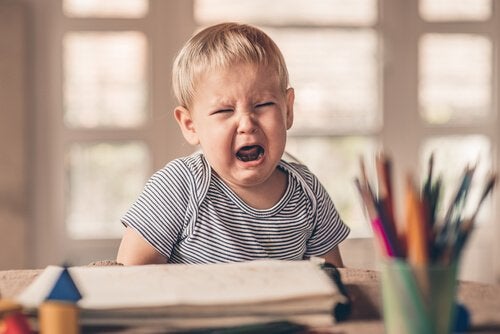 Many parents are concerned when their children throw tantrums. However, parents can use certain methods to calm their children down and prevent future tantrums from occurring.

Understanding why children throw tantrums is extremely important for their prevention. Temper tantrums are inevitable as children grow. They create uncomfortable situations that can test a parent’s abilities and patience.

Now, can something be done to prevent tantrums? How should we react when we are confronted with them?

Tantrums can occur for various reasons. For example, children may get upset when their parents refuse to give them something they desire enthusiastically. It may be a toy, play-time or refusing to take them to a certain place.

Why do children throw tantrums?

As contradictory as it sounds, tantrums are a part of a child’s emotional development. They usually begin between the age of one and four when the child begins to actively interact with his or her environment.

Children throw tantrums to express frustration and anxiety about not being able to get what they want. They aren’t capable of controlling their negative emotions and this causes them to “explode.”

How can parents calm tantrums?

Most experienced parents know how to deal with these situations. However, not all children can be treated equally. There are also many first-time parents who still haven’t found a way to adequately calm their children’s tantrums.

Here are some tips to help you get through these situations in the best way:

During these high stress moments, the first thing you should do is keep calm. Don’t give into their demands immediately. Although it may seem hard to believe, at some point, children will exhaust themselves, allowing you to apply corrective measures.

Caution! This doesn’t mean that you should ignore your child. On the contrary, it is best to speak to him calmly and serenely to get him to reason logically.

If you start to lose control, you’ll add more stress to the situation. For your own good and for the good of the child, adding more stress to tantrums is the last thing you want to do.

Dialogue and empathy are two key tools that are useful in these situations. If you manage to calm the child down, ask him why he’s throwing a tantrum. After his own explanation, try to explain your point of view and the reasons behind your decision.

These tools are also a great way to prevent tantrums. The next time you deny your child of something, he’ll be able to understand your reasoning a little better. After a while, you’ll be able to see a positive change in his behavior.

Take the child to a quiet place

If you are in a public place, take the child aside to a place where he can calm down. Then, give him a hug and share your point of view with him.

This method is very useful when it comes to decompressing stressful situations. It allows for space to vent and to find serenity.

When your child throws a tantrum at the supermarket for example, you should make him know that you’re the one who is in control of the situation.

You should teach your children that tantrums aren’t the way to get what they want. You can even foresee these tantrums and let them know in advance that they won’t be effective.

It’s also important for parents to take into account the various reasons why their children throw tantrums. If a child is throwing a tantrum because of hunger, fatigue or lack of attention, it is a parent’s job to fully satisfy those basic needs.

Tantrums usually begin between the ages of one and four.

How to prevent tantrums

Although it sounds like magic, tantrums can be prevented and even eliminated completely. How can this be done?

First off, make your children understand the rules that you have set for them. You must make them understand through dialogue that they can’t get everything they want. If they want something specific, there are constructive and peaceful methods to ask for it.

Tantrums are children’s way of expressing frustration and anxiety about not being able to get what they want.

On the other hand, it is wise to reward children when they deserve it. For example, if your child goes to visit a relative or to a store and acts appropriately, you should let him know that you appreciate his good behavior. This way he’ll feel valued and will also feel that his good behavior doesn’t go unnoticed.

Finally, it’s important for parents to evaluate the specific reasons behind their children’s tantrums. After the causes are identified, appropriate solutions should be found.

As parents we shouldn’t be too strict. However, it’s important to get involved in making positive changes to their behavior. This will help them understand the value of coexistence and social integration.