Children Who Talk to Themselves: Is It Good or Bad? 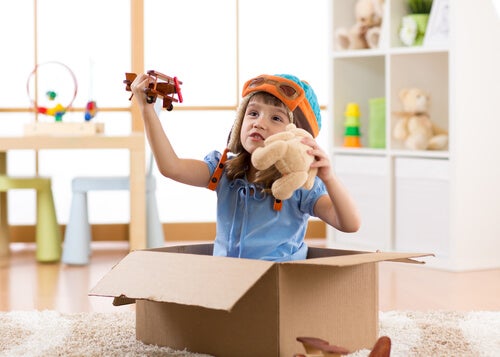 It’s often said that children who talk to themselves suffer from some type of disorder, are upset or have had something happen to them.

However, the reality is different. Not only are they mentally healthy, they also have an excellent connection between intelligence and what is known as private speech.

According to studies carried out by expert doctors, such as psychiatrist Luis Rojas Marcos, talking to yourself and speaking out loud helps you make thoughts more precise and accurate. In other words, it helps you think.

Decisions made this way are more effective. Thoughts are also organized in a more coordinated way and even represent an important support for personal improvement.

The bottom line is that if your child talks to himself, let him know that it means he’s very smart.

Why is it good for children to talk to themselves out loud?

Many parents have seen children playing alone and talking to themselves. This can even happen with adults.

Many people tend to talk to themselves while doing various activities. And this can definitely be a sign of intelligence.

Never reprimand a child for doing this. These soliloquies contribute greatly to their language development and also help control behavior. Therefore, they acquire excellent skills.

If we observe our children carefully, we’ll realize that they speak more when they’re alone than when they’re in company.

These monologues in children 10 years of age represent between 20% and 60% of their interaction.

Psychologists, parents and educators have always seen this behavior as a sign of disobedience, distraction or even mental instability.

On the other hand, some experts see this situation as a development of cognition in children.

If we see this model as an integral part of the child’s development, all those involved in teaching should promote it in healthy children and implement it in children with mental disorders.

Situations presented in children who talk to themselves

There are three very common situations in which children talk to themselves.

These situations are like a kind of analysis that the child does, as a way of planning a game. Whether he’s playing or doing a task, he may be talking to himself.

This is good for mental health, since it not only keeps the neurons active, but keeps a child entertained in things that are important to him.

Benefits of talking to yourself

That’s why, when we see children talking to themselves while they’re performing a task, we can conclude that they’re looking for a solution to a problem.

This, in addition, serves as a support tool to come to a solution that may be complex.

In conclusion, many researchers have stated that there is a relationship between intelligence and the quantity and quality of speech.

This indicates that the more intelligent a child is, the more he’ll use his speech. The content of his speech will also be more mature.

Children who talk to themselves have the opportunity to tell themselves fantasies, to talk with an imaginary friend and even to objects that don’t really exist. This is how they tell their dreams.

Speaking to yourself, then, is considered a tool for the development of self-control and thinking.