If you have adolescent children and you wonder if you should check their cell phones, we want to offer you some important insight. What's most important in these cases is building a relationship based on trust and dialogue to avoid misunderstandings. 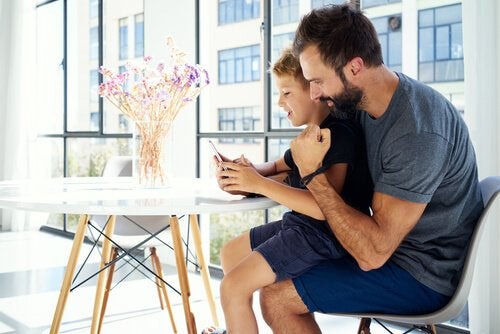 In this modern world of technological advancements, cell phones place many advantages and a great deal of information at our fingertips. As responsible adults, we should ask ourselves if parents should check their children’s cell phones. After all, the written information, music and videos that out kids can access on their phones is infinite.

It may seem clear that the only way to be sure of what our children are seeing is by accessing their cell phones. Doing so also lets us know who our children are in contact with and what type of conversations they’re having. Supervising certain areas of our children’s lives isn’t just important, it’s our obligation.

Checking your children’s cell phones: Does it produce the desired effect?

Checking our children’s cell phones does, of course, give us an idea of the information they’re accessing. However, this invasion of privacy can actually be counterproductive.

Your children can easily interpret your actions as an act of distrust and a lack of respect. This can actually produce negative behavior.

Children may easily deduce that it doesn’t matter how they behave or what they do with their phones… The fact of the matter is, their parents don’t trust them. In fact, youth may even develop negative behaviors just to get back at their parents.

None of us want our children to rebel, to start smoking, or worse. And perhaps it’s that fear that keeps us from exercising too much control over our teens. And there’s some logic to that. Excessive control can produce just the opposite of what we want.

That being said, parents can’t just sit around with their arms crossed and wish for the best either. If we look the other way, things can also get out of control very quickly. If we’re permissive or naive in our parenting, we’re just as likely to end up grieving over things we can’t change.

So then, what should we do?

The best thing you can do is gain your children’s trust. If you do, then you won’t have any need to check their phone all the time. While this can be a challenge, it’s something you can do if you start at a young age.

One of the best ways to generate trust is to not overreact when our children tell us something. For example, if your 10-year-old daughter tells you she has a boyfriend and you yell at her, you’re making a big mistake.

If you react this way, your daughter will become afraid to tell you about her life. It’s better to listen attentively and control your reactions, even if you’re screaming on the inside. That way, she’ll learn that she can come to you with anything, rather than hiding the truth from you.

Of course, we’re not saying it’s okay for her to have a boyfriend when she’s 10. But you can reason with her and help her understand why this is inappropriate.

Young people who are an open book

There are certain things that we learn at home. It’s normal for young people to want to embrace their new condition of near adulthood. As a result, one of the first things they’ll demand is privacy.

We need to understand this process and abstain from being nosey. Sooner or later our children will likely let up and stop being so demanding.

Context is also important. If you and your partner keep your phone passwords a secret from one another, your children are likely to do the same.

Children need to see parents who are open and respectful of one another, rather than controlling or secretive. Your children will model that same openness and probably not give you a lot of problems.

Emotional maturity and hobbies versus sexting

Some parents go through their children’s phones because they’re afraid they’ll fall into the degrading behavior or “sexting.” Sexting refers to the exchange of images with sexual content via phone or internet.

However, the best way to combat sexting and other similar behaviors is to reinforce your children’s self-esteem and promote emotional maturity.

This is where we need to place our focus, rather than obsessing over our children’s cell phones and disrespecting their privacy. We must help our children appreciate their value and help them discover their passions.

In turn, they’ll be less likely to develop addictions to cell phones and other technology. What’s more, we’ll be working to effectively prevent inadequate cell phone use that threatens our children’s physical and moral integrity.