6 Important Changes Between the Ages of 2 and 3

Some of the biggest changes in a child's life occur between the ages of 2 and 3. Find out what happens at this age! 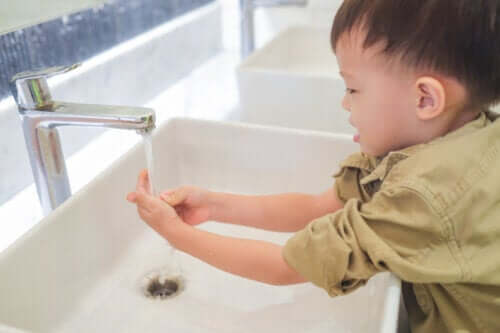 Between the ages of 2 and 3, our little ones go from being babies to becoming children. Because of this, we can expect that, at this stage of development, children will experience a whole variety of changes – cognitive, physical, emotional and social.

Would you like to know some of the most important changes that occur at this age? Read on and we’ll tell you.

6 important changes between the ages of 2 and 3

In addition to growing physically, children between the ages of 2 and 3 also mature at a cognitive level. Many of their abilities will be widely developed during this stage.

They also begin to relate to the world in a different way and gain autonomy and independence. They begin to assume certain tasks that they couldn’t do before, or that they used to carry out with the help of their parents or other adults.

In this way, parents will observe how their children change and become more and more willing to learn and acquire new skills.

“There is beauty and joy in every stage of a child’s life, but there is a little inevitable pain when they move from one stage to another.”

1. Between the ages of 2 and 3, children acquire autonomy to go to the bathroom

According to the Early Care Team of La Rioja, Spain, at the age of 2, children are able to recognize the potty and the toilet. They can even use them properly, provided that an adult shows them how.

When they’re 3 years old, children usually ask to go to the bathroom. They can even go alone, although they usually need help to clean themselves afterwards. In addition, once they’ve finished taking care of their needs, they’re able to wash and dry their hands autonomously.

2. They acquire a certain autonomy to dress themselves

Most 2-year-old children know how to take off their shoes and pants, if someone has unbuttoned them previously. By the age of 3, they become more skilled in this area; they learn to undress and dress themselves with adult help.

3. They learn to eat independently

Another notable change between the ages of 2 and 3 is that children go from being spoon-fed to eating on their own. They’ll have some difficulty learning how to completely master the use of cutlery, but, with time, they’ll spill less and less food.

During their second year of life, children use simple language based on the completion of sentences formed by a noun and a verb. For example: “I want water” or “mommy come.” In addition, they answer simple questions, such as: “What are you doing?”, “What do you want?”, “Where is it?”

However, during their third year, speech becomes more complex and understandable. Children will learn to master virtually all phonemes and add gerund verbs, plurals, pronouns and articles to their vocabulary. This makes them improve their oral language and enables them to tell others what they are doing, what they want, or what is happening to them.

Between the ages of 2 and 3, most children will start to go to a kindergarten, and they’ll go from relating almost exclusively to the family nucleus to interacting with other children and other adults (the assistants/teachers).

So, this is a time when, by significantly increasing their social life, they learn skills related to socially accepted norms and behavioral habits.

6. They begin to help at home

Although it may seem early, children between the ages of 2 and 3 can begin to help at home, helping to tidy things away. For example, they can help to pick up and put away their toys or put some simple objects on the table, such as plates, napkins, spoons, etc.

Conclusion on changes between the ages of 2 and 3

Children between 2 and 3 years of age experience a lot of changes in their lives. These changes affect the parents too, who must accept that their children are growing up and not as dependent as they once were.

Nevertheless, if, at this age, some of the changes we’ve mentioned above don’t occur, then there’s no need to be alarmed, as each child follows their own pace of development and learning.

Simple Crafts Activities for Children Ages 2-3
Do you have small children between the ages of two and three? In this article, we'll examine some simple crafts activities for your little ones. Read more »
Link copied!
Interesting Articles
Childhood behavior
Why Do Children Become Aggressive?