Your Child's Personality Influences What They Eat 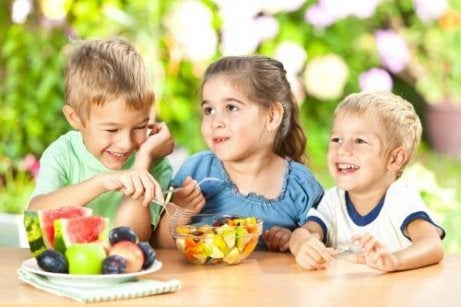 A child’s personality has been shown to influence what they eat. We’ll discuss how below.

We often see children who are fussy and picky at mealtimes. The dinner table can sometimes even turn into a battleground.

When a child doesn’t want to try certain foods or has a favorite, this has to do not only with habits or personal taste, but also with personality.

Each child has particular characteristics and traits that make them different from others. At some point in their development, it’s quite common that they’re reluctant to accept certain food or behave in a certain way when offered a particular food.

However, these behaviors aren’t simply explained by the fact that they’re children. They can be due to a child’s personality.

The good thing about knowing this is that it can help you make better parenting decisions and learn how to cope with these situations.

As they grow older, a child is exposed to food in many different ways. At the beginning of their life, their staple food is milk. This changes as they grow, and it’s important to introduce new flavors and eating habits to them.

The relationship that a child establishes with food is what we call their food behavior.

It has to do with several issues: how they observe their family’s relationship with food, the availability of food, social status, affection from parents, and cultural traditions.

Thus, several factors can influence a child’s behavior around food.

Let’s look at different types of personalities and characteristics:

What influence does personality have on eating?

There are studies which show that both a child’s personality and their emotions influence their eating.

Anger, which is usually seen in difficult children, causes the child to be more fussy when it comes to tasting food.

Sadness or anxiety can cause a lack of appetite. On the other hand, the happiness and calmness characteristic of “easy” children, make these children better suited to a diverse range of foods.

In general, problems with lack of appetite are linked to children’s experiences associated with social and family interactions.

The problems that children experience in their relationship with their parents or their environment will influence their appetite.

While this has to do with their emotions, the child’s degree of sensitivity is linked to their personality, meaning that one leads to the other.

Refusing to eat a bite, on the other hand, is associated with cases of overprotection and dominant personalities. Parents surely have experience with the latter.

Children who reject food can be identified according to personality traits:

Now, what can we do with this information?

The good thing about being familiar with the relationship between personality and food is that you can identify children’s particular behaviors.

Personality influences children’s behavior at mealtime. Age also plays a part in this dynamic, as it causes children’s relationship with food to become more or less extreme.

The solution to problematic behaviors will depend on this interaction between your child’s personality and food.

One option may be to adopt a different parenting approach. Or, you could change some of your family’s eating habits. In any case, patience is essential.