What Is Dysphemia? Keys to Understanding

Dysphemia is a speech disorder that is treatable through speech therapy and psychotherapy. Is this just another name for stuttering? What are the symptoms? We'll talk about this and much more in today's article. 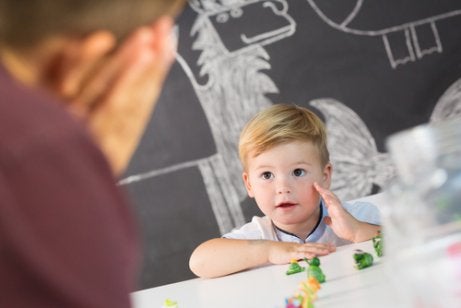 Is dysphemia a synonym for stuttering?

Dysphemia is a speech disorder that involves the involuntary repetition of words and sounds. Therefore, many associate it with stuttering and a lack of development within the progression of speech in children. But are dysphemia and stuttering really the same thing?

Stuttering usually appears in children around the age of 3. It usually has to do with developmental issues, which is why it’s more technically known as developmental stuttering.

Developmental stuttering occurs because a child’s reasoning works must faster than his or her ability to express language. As the child continues to develop, the issue disappears.

While dysphemia is also often referred to as stuttering, it doesn’t go away over time. When a child reaches 5 years of age and the speech difficulties persist, then he or she may have dysphemia.

In its initial state, dysphemia produces speech alterations on a sensory level and in regards to the ability to speak. Then, motivated by a fear of not being able to overcome one’s environment, the individual develops a false self-esteem. The mind has a great deal of influence on the final result of pronunciation.

Stuttering, on the other hand, refers to the repetition of syllables and sounds as well as their prolongation. In this case, the repetitions and halts appear when there is a break in rhythm.

Since stuttering almost always has to do with a child’s own speech development, it usually goes away on its own. Therefore, only 1 in 20 children maintain their stutter over time. Most manage to overcome it during adolescence.

After highlighting the differences between dysphemia and stuttering, you can see that they’re two separate problems. Now let’s look at the different types of dysphemia:

This type of dysphemia involves the interruption of the normal flow of speech. These interruptions occur due to spasms. Diagnosis is usually fairly easy because the patient’s face is visibly tense. A person with tonal dysphemia is unable to correctly control jaw movements.

This type of dysphemia refers to a genetic condition. A person with clonal dysphemia repeats syllables before initiating a sentence or when continuing on with it. Unlike tonal dysphemia, there is no facial tension, though some spasms can slow speech down.

Mixed dysphemia is the most frequent type of dysphemia. This condition is generally a combination of the symptoms of tonal and clonal dysphemia. That doesn’t mean that there’s no way to treat it. In fact, there are a number of recommended treatments that help children overcome this difficulty.

Some of the most common factors that influence dysphemia are:

The occurrence of dysphemia is much higher in men than it is in women. The distribution of dysphemia cases, according to gender, is as follows:

As you can see, men are 4 times more likely to suffer from dysphemia than women.

There are genetic factors that play a role in dysphemia as well, such as in the case of monozygotic (identical) twins. When twins come from only one egg and sperm, then there is a high chance of one of the children developing dysphemia. Furthermore, if one identical twin has dysphemia, the other has a 77% chance of presenting dysphemia as well.

As for fraternal, non-identical twins, the numbers are lower. These twins are the result of two different ovules and two different sperm. The chance of a fraternal twin presenting dysphemia is 32%. Therefore, there is between and 30 and 40% chance of parents passing this condition onto their children.

“In its initial state, dysphemia produces speech alterations on a sensory level and in regards to the ability to speak. The mind has a great deal of influence on the final result of pronunciation”

When starting to develop vocabulary, children may present a deficit that stems from the visual stimuli they associate with word meanings. In other words, they may have a hard time associating a meaning with the written word.

As a result, the child has difficulty pronouncing the word, which can lead to dysphemia. However, it’s possible for children to achieve vocabulary fluency over time and with proper association of words and images.

Being in a state of tension for a long period of time can cause frequent episodes of dysphemia. In other words, subjecting a child to pressure so that he or she pronounces words correctly is counterproductive. Therefore, it’s not a good idea to use this type of speech “therapy” with children.

This disorder usually appears during a child’s first years of life. Therefore, its appearance coincides with connected language – in other words, when a child begins to combine several words to form his or her first sentences.

Th initial stage of dysphemia can appear at around 3 years of age. It’s associated with a difficulty in articulating language, which is typical at this age.

If the condition persists after 10 years have passed since the appearance of the first episodes, then the individual is considered to suffer from permanent dysphemia. In that case, the most common symptoms are the following:

Redundant language, incoherent discourse and incomplete phrases are common linguistic symptoms. A lack of coordination between language and thought is also a symptom of this disorder.

Anxiety when it comes time to communicate, temporary inhibition and fear of words (logophobia) are all signs that a child may have dysphemia. It’s important not to put pressure on the child, as this can make things worse.

Hypertension, spasms, nervous tics and certain psychogalvanic responses such as paleness, sweating, dizziness are some of the bodily manifestations of dysphemia.

It’s best to seek the help of a specialist who will be responsible for establishing a plan for treating and preventing dysphemia. In general, therapy includes a combination of the following:

With the help of proper treatment through speech therapy, improvement is possible. Above all else, it’s important to treat children who have dysphemia with understanding, care and support.