Home » Children » The Effects of Divorce during Childhood and Adolescence

The Effects of Divorce during Childhood and Adolescence 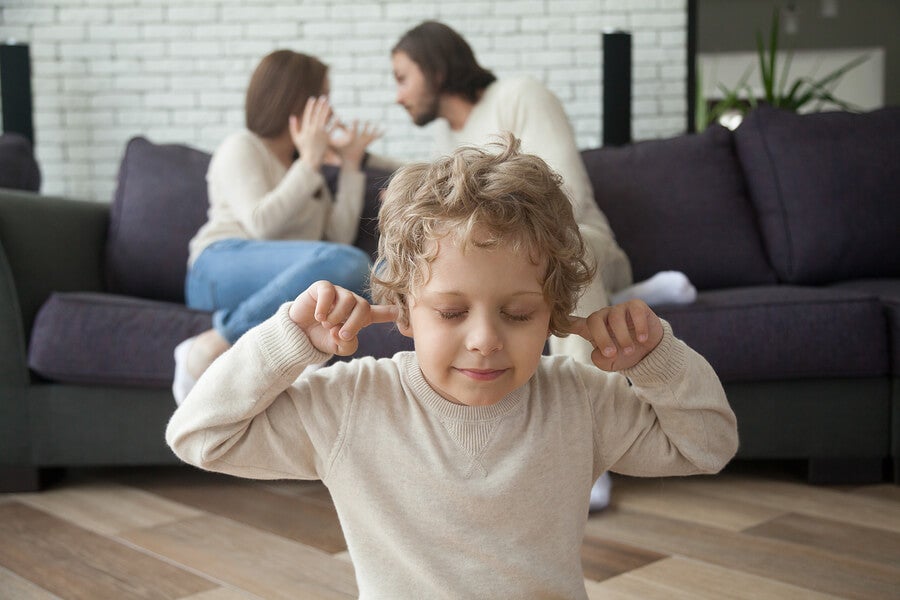 If you and your partner are separating, learn about the effects of divorce for your children and how you can help them.

The divorce of parents during childhood is becoming a more frequent experience for children every day.

This brings terrible emotional, social and economic consequences for the spouses, but undoubtedly the children also suffer a lot during a divorce. What can you do for them?

The effects of divorce according to age

It’s important to keep in mind that there will be common behaviors depending on your child‘s age. Therefore, you can’t assume that everything is the fault of divorce.

However, you should also not just assume that it will pass with time. You must know how to care for your child and put the right limits in place according to his or her age.

While it’s true that the suffering of divorce will be experienced by your child regardless of age, the ability to cope with it will vary depending on their age.

In contrast, adolescents from 13 to 17 years of age don’t display a significant variance in their ability to deal with divorce, as is the case for children.

Next, we’ll see the effects of divorce and what considerations you should take into account.

At this age, your child hasn’t developed enough to understand what is happening. Therefore, it’s impossible for him to understand that you’re in the middle of a divorce. In spite of this, he suffers and reacts accordingly.

This is because babies are very sensitive. For that reason, they can perceive the tense environment through the parents’ emotions and from their absence.

Usually, at this age they’re more likely to get irritated by things and to cry because of the feeling of abandonment. Also, their sleeping and eating patterns are altered, which can bring health problems.

The best way to counteract these consequences is for the baby to see both parents daily in an environment that is as calm as possible.

Both you and your ex-partner should talk to him, sing and play with him as often as possible. You should try to make sure his eating and sleeping schedule isn’t affected by your activities.

At this age, your child has already realized that his parents don’t live together, but he doesn’t understand the reason. This is dangerous, because at this age it’s important for your child to feel safe, protected and in a stable place.

This, of course, will be difficult because of the separation. As a result, emotions such as anger and sadness aren’t handled well.

This is a stage of growth in which your child develops speaking and walking skills. These might be a little delayed due to a childhood divorce. Children may also suffer from a lack of sphincter control or psychomotor problems, among others.

So, it’s important that you let your child know that both of his parents love him. Show him affection and attention so that he knows you won’t abandon him when you leave.

Also, don’t scold him strongly if he shows any developmental delay. Instead, help him gain the autonomy to control himself.

Babies are very sensitive, and for that reason, they can perceive the tense environment through their parents’ emotions.

This is an age of egocentricity, so your child may come to think that everything that happens has to do with him. So, if the divorce occurs during this age, your child might easily think that it’s his fault and enter a state of depression.

Therefore, it’s vital that you promptly correct your child’s erroneous conclusions regarding divorce. Remind him that despite everything, he’ll have the presence and help of both his mom and his dad at all times.

At this age, your child focuses a lot on school. The world no longer revolves around him, and he begins to pay attention to his feelings and those of others.

This will make him not express his emotions, even if he feels sad or angry about the divorce, for fear of rejection by one of his parents. This can cause isolation.

It’s important that you’re in constant communication with his teachers so that your child isn’t affected academically.

On the other hand, you shouldn’t neglect to communicate with your child, and you should make him understand that you and your former partner aren’t going to get back together again.

Unlike when they’re children, in adolescence your child doesn’t depend as much on your opinion, but rather on the opinion of his social group.

Therefore, he may try to manipulate you or others to get something favorable. This can become unsafe, especially when trying to have a relationship with the opposite sex.

For that reason, it’s very important that you and your ex-partner don’t neglect communication. Don’t try to get on your child’s good side by denigrating your ex-partner. Take him into account when you make decisions, and give him responsibilities.

Finally, remember that your child is the most valuable thing in your life and you should give him the best. Never neglect him or deprive him of visiting his other parent. On the contrary, help him be self-confident and grow as stable as possible.