What is the Electra Complex? 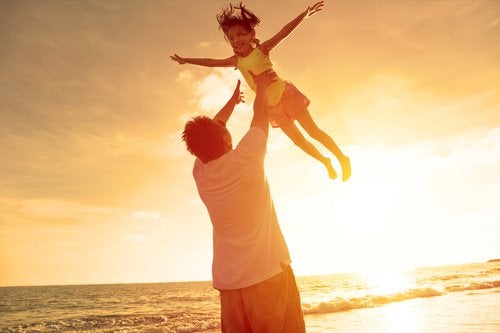 Have you ever heard of the Electra complex? In most families it’s obvious that, even though the relationship between a father and a daughter can sometimes be difficult – depending on the stage of life – it never ceases to be special.

Greek mythology tells us that it was Electra’s own mother, or her mother’s lover, who killed Agamemnon after he returned once the Trojan War was over.

Therefore, Electra decided that her mother and her lover should die. She wanted revenge on them because they had taken away what she loved the most: her father.

Let’s look into the phenomenon of the Electra complex and how it affects young girls.

What is the Electra complex and what are its characteristics?

The Electra complex can be defined as the stage when girls compete with their mother to get their father’s full attention. It’s colloquially known as “Daddy-itis” and occurs in most cases between 3 and 6 years of age.

It was the neurologist Sigmund Freud who studied what he described as the Oedipus complex, to refer to the special bond between a mother and her son. Later on, Carl Jung decided to give the name “Electra complex” to the relationship between a father and his daughter.

He believed that the connection between a father and a daughter had nothing to do with the relationship between a mother and her son.

In the first instance, Freud considered that girls tend to be more attracted to their mother in their first years of life. However, little by little, they discover the multiple differences between the sexes.

Therefore, this is the moment when they begin to see the figure of the mother as a rival they have to fight to win the father’s affection.

This situation usually takes place in most families and generally doesn’t have much of an impact. However, when it begins to extend over time, that is when we start to talk about the Electra complex.

From then on, the girl will have her father as her only role model. Because of this, she will always look for people who look like him: a figure that gives her security.

It is important not to confuse the Oedipus complex with the one we are talking about today. Even though the basis is the same, they have nothing to do with each other.

Despite this, it is interesting to observe how children build their sexual identity, using the relationship with the parent of the opposite sex.

Now let’s have a look at the main characteristics of the Electra complex:

Signs of the Electra complex

Here are 4 facts that could be an indication of the Electra complex:

1. The girl tends to repeat phrases such as: “When I grow up I want to marry my Dad” or other similar ones that show the great affection she has towards the father figure.

2. She cries inconsolably when her father goes out, because she really feels his absence and feels unprotected.

3. She continuously wants to be between dad and mom, as she feels jealous when she sees how the mother shows signs of affection towards the father.

4. During this process, a slight resentment against her mother can be seen, as she feels that her position is being usurped, and most importantly, her admired father is too.

Tips for parents: how to deal with the Electra complex

In the first place, there is no need to worry too much, as it is only a passing phase in the development of young girls. To be able to cope with it, one must have patience and be consistent, while, at the same time, helping them to overcome these internal conflicts.

This will allow them to mature and grow, and gradually build their own personal identity. Some of the main tips are to avoid paying too much attention to their actions, and not to mention how the girl expresses her feelings. You have to try at all costs to avoid entering their “game.”

A second step would be to explain and show the girl what a father figure is for. To explain that, even though her father will always be the one who loves and protects her, her mother is also so important, and she is his partner.

Like all stages of life, this one also comes to an end. It usually occurs when girls are 6 or 7. As of this moment, they are no longer rivals of their mother. They understand who both parents represent. They realize that both their mother and father are two pillars in their life, not just one.