5 Emotional Wounds During Childhood That Last Into Adulthood

Have you ever wondered if there are emotional wounds from childhood that last into adulthood? Below, we'll share some information about the subject. 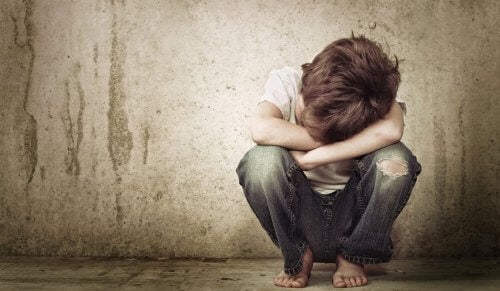 Most people forget the majority of the situations they experienced during childhood. For example, their first day of school or the first time they rode a bike.

However, it’s harder to forget the moments when we suffered humiliation or were victims of some form of injustice. These emotional wounds tend to significantly affect a person’s psychosocial development. And they are capable of producing fears, lack of trust and other issues for the rest of a person’s life.

They can also impede the establishment of healthy bonds as well as positive social interaction, generally speaking.

The emotional wounds that occur in childhood don’t have to be permanent. Fortunately, many of them have a solution and can be healed with the help of a therapist or psychologist. The support of loved ones is also key.

To overcome one’s emotional wounds from childhood, he or she must first be aware of them. If someone disguises their pain or avoids facing it for fear of being hurt, healing is impossible.

The 5 most common emotional wounds during childhood

Almost all human beings experience fear of abandonment to some degree or another. Not only by their partners or friends, but also by family members, pets, or even those with whom they don’t have a very strong bond.

People who suffer this sort of dependence also have to deal with the fear of rejection. For this reason, they create barriers so as not to allow others to get too close. They fear others may hurt them in one way or another.

This fear tends to appear in individuals who suffered abandonment during childhood. This abandonment may have been accidental or intentional. The resulting wound is not easy to heal, and doing so involves introspection. A person who lives in fear of abandonment must begin a journey of learning to trust others.

Just like the fear of abandonment, the fear of rejection is one of the deepest emotional wounds that affects people. It doesn’t only involve rejection by others, but also a person’s rejection of him or herself.

This fear can be the result of various factors, such as rejection by one’s parents, family, friends or siblings. As a result, the child develops negative thoughts associated with rejection, feeling unloved, and the erosion of one’s self-esteem.

People who suffer from this type of fear often feel they don’t deserve affection and understanding. These feelings drive them to isolate themselves from those around them. To resolve the issue, they must start to make decisions on their own, without worrying about what others will think.

Wounds caused by humiliation often appear in people who experienced criticism and lack of approval by strict mothers during childhood. This is especially true among those who were accused of being clumsy, bad, immature, annoying, etc. This destroys a child’s self-esteem.

As a result, individuals develop a personality that depends on what other people say. They also create a protective shield to protect themselves from threats that haven’t appeared yet.

To overcome this sort of situation, it’s important to work on one’s independence, freedom and self-understanding. This will allow people who are afraid of humiliation to let go of their fears.

The fear of betrayal is another one of the most common emotional wounds during childhood. Generally, it appears among those children whose parents betrayed them by not following through with their promises.

In doing so, parents create a situation that produces a great deal of mistrust, jealousy, and unhealthy relationships.

Being the victim of betrayal during childhood often causes individuals to develop controlling personalities. While these people are conscious of their mistakes and problems, they don’t appear to have any intention at all of changing.

To achieve change, these individuals need to work on certain aspects, such as the following:

The fear of injustice is often the result of parents who are cold and authoritative. This parenting style marks a child‘s upbringing with extreme demands and little room to make mistakes. As a result, individuals feel useless and incompetent.