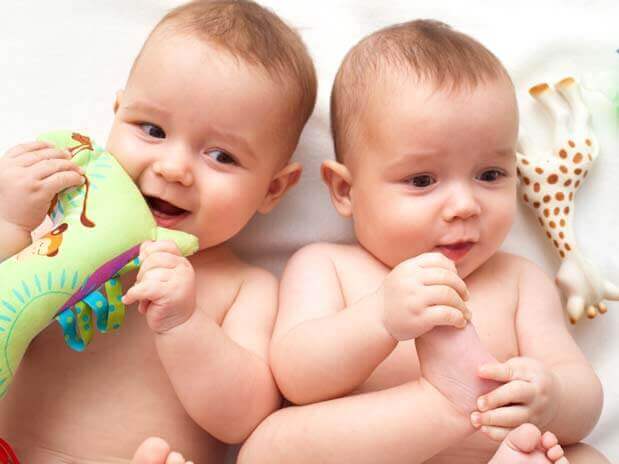 There are many myths and unusual facts about twins, so we want to share some interesting information that you might not know.

Have you ever met a set of twins and had trouble telling them apart? According to statistics, three out of every thousand pregnancies are identical twins. Identical twins are the product of a zygote that divided very early on into two identical babies, even sharing the same DNA.

It is important to emphasize that identical and fraternal twins are not the same. Identical twins share the majority of their genetic material due to the fact that they’re both born from the same fertilized egg divided after conception.

During the last decade, cases of twins and triplets have increased considerably due largely to assisted fertilization and other medical procedures for aiding with conception. These processes don’t result in identical twins, which can only occur naturally.

There are many more interesting facts about twins. Here are a few:

1. They have different fingerprints

When you see two completely identical children, you might think they have the same fingerprints, but that isn’t so. When the babies are developing, according to the Huffington Post, each child attaches to the amniotic sac in different places, which means that different lines form on their fingers. As a result, they don’t have the same fingerprints.

Another interesting fact is that 22% of identical twins are left handed, compared only to 10% in the general population.

2. They aren’t as identical as they look

According to statistics, twins are literally “mirror images.” 25% of children develop as if they are reflections of each other. In other words, if one is left handed, the other is right handed.

If, for example, one of the children has a birth mark on the right arm, the other will have the same birth mark but on the left arm. But twins do share brain and thought patterns.

Many people think that twins have super powers or have different ways to communicate with each other, but that isn’t true. According to Discovery, this is only a myth, which has been debunked over time.

It has never been proven that twins are mentally connected in any special or different way. Since they grow up together, it is very normal that they would know each other extremely well, which gives rise to the idea of telepathy.

These identical twins from Minnesota were separated at 4 weeks old. They were both adopted by different families and met when they were 39 years old. Their story was published in the book Intertwined Lives, by Nancy Segal.

Although they grew up without any type of interaction, they had the same height and weight. They had the same favorite beach in Florida, were good at math, and shared hobbies like carpentry and mechanical drawing.

According to research by the University of Padova in Italy, twins seek contact while in their mother’s womb, and even touch the other twin more often than themselves. In the cases they studied, this occurs starting at week 14. According to statistics, conjoined twins represent 1 in every 200 thousand pregnancies.

6. They have their own language

This happens because the children grow up together, just like people who claim twins are able to communicate mentally. But in reality, this type of language can also arise in siblings who aren’t twins, mostly from talking to one another from a very early age.

This starts when kids are learning to talk, as they help each other learn. It is strengthened by the fact that they are very close, and even end up inventing their own words, which is often considered their own exclusive language.

Although they may appear totally identical, they aren’t. They share a large portion of their genetic material, but not 100%, as people often think.

According to a study by the University of Alabama in Birmingham, some parts of their DNA can differ in the number of genes they form. To be considered completely identical they would have to share 100% of their genes and have been born simultaneously, according to Discovery.

Having fraternal twins is genetic. If there is one case of fraternal twins in a family, it is very probable that others will be born. This is a consequence of superfecundation, which makes a woman capable of releasing more than one egg during the same cycle.

Other interesting facts about twins

There are a lot of myths about twins that don’t match the reality of identical siblings. Although some can be proven, many facts continue to be a mystery. What is true is that twins are joined by strong ties that help them to develop, learn, and grow.