Fear of Failure in Children: How to Avoid It

Fear of failure is something that we must help our children overcome so they can be happy day by day. 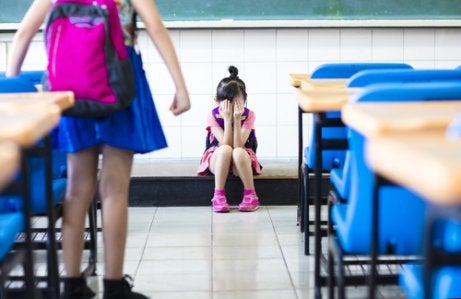 When children have a fear of failure, their potential is diminished, often causing them great emotional uneasiness. They feel weak, vulnerable, demotivated, incapable and thus stop trying to move forward.

The word “failure” causes a lot of fear in adults. This is usually consequential of an education based on punishing mistakes and on giving them negative connotations.

When mistakes are a cause for mockery, contempt or rejection, it becomes difficult for someone to seize opportunities. As a result, it affects their growth and use of everyday opportunities.

Being unable to fight for what you want diminishes your quality of life and won’t provide you any welfare. We’ll talk about this in more detail in this article.

If you believe that your child has a fear of failure, it’s best that you help him or her overcome it with the techniques mentioned below.

Characteristics of children with a fear of failure

The fear of failure in children is easy to detect. They usually fear being judged and rejected for whatever they do. As a result, they tend to be very cautious and avoid relating to other people.

Similarly, they tend to feel uncomfortable and anxious in carrying out certain tasks for fear of making mistakes.

If in a family environment they’re punished for their mistakes, they’ll feel very intimidated and this will gradually generate a distrust regarding their parents. This can lead to a serious deterioration in the relationship.

Fear of failure in children prevents them from taking risks and giving themselves the opportunity to explore the world and grow. Therefore, their experiences are usually poor.

A child may fear not being able to achieve success and thus refuse to carry out a project . This insecurity and lack of self-confidence will affect many aspects of his or her life.

What causes fear of failure in children?

When parents exaggeratedly pressure their children into being perfect in everything they do, they create a distorted reality for them, preventing them from having adequate psycho-emotional health.

Unfortunately, the media fosters fear of failure in children and in the general population.

How? Well, by spreading the idea that a failed person looks bad, has no prestige, social relationships, few (or no) capacities and, in short, is a loser.

Rejecting errors is closely related to this image. Additionally, the concept of a “winner” or apt person has been reinforced with material goods and the ephemeral world of advertising and commerce.

Strategies to overcome it

Failure isn’t the end of the world. Failure or mistakes provide opportunities to grow, expand our analytical capacity, learn, correct and move forward much stronger and wiser. And it’s very important that we let children know this.

It’s imperative that children be taught to overcome their fears for themselves. They should also know that they’ll have the affection, advice, and support of their parents. In this sense, we must strengthen their capacities, guide them, provide them with security, respect, and understanding.

They should also be constantly reminded that failure can be overcome and that it doesn’t always represent an unpleasant experience. Many times mistakes leave funny anecdotes.

Let’s show them what things they can change and help them with the ones they can’t on their own. This way, it’ll be easier to understand that the label of “loser” or “unsuccessful” doesn’t define us or mark us for life.

Parenting
Why Is It Important to Make Up in Front of Children?