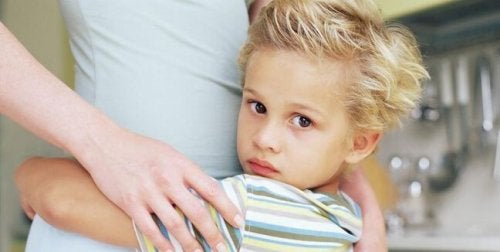 Being afraid is totally natural in humans, especially in children, who are still discovering the world and its threats. In this article, we’ll review the most common fears in 6-year-old children and how to address them.

As a child interacts with the outside world and gains new knowledge through stories, television or video games, he experiences new sensations.

Before the age of 5, children tend to spend most of their time at home with their parents. At age 6, children become more exposed to the real world and new events. They start interacting with friends at school, playing in the neighborhood and changing their tastes.

They may like to watch scary TV shows or kill villains in computer games. But they don’t want to face fears in real life.

In earlier ages, a child’s fears are associated with the absence of their parents, animals, monsters or physical phenomena (lightening, for example). From the age of 6, the range of possibilities widens considerably.

Here’s a list of the most common fears in 6-year-old children:

As we said before, the child is now in a stage where he likes to go outside. He may run into a dog or another animal that hurts him and gives him a bad experience.

This is the most common thing that causes a fear of animals. However, it can also be due to lack of knowledge. For example, a child may fear cats until approached by one, finding out that it’s actually friendly.

We can also include insects in this section. Spiders clearly top this list, which also includes cockroaches and worms.

Fear is natural and prudent, and knowing how to overcome it is to be brave.

At this age, children are encouraged to sleep in their own room. Consequently, turning off the lights is associated with the appearance of all kinds of evil beings who take advantage of this loneliness.

It’s a perfectly natural fear that even occurs in adults. Therefore, you must be patient and, if asked, leave a light on at night until your child is no longer afraid.

Many children are afraid of thieves, kidnappers or any type of bad person who may be out in the streets.

Although a state of alertness keeps them on guard, in excess it can cause distrust in others when the situation doesn’t warrant it.

It’s important, however, that you teach your child to never interact with strangers under any circumstances. This way, he’ll be safer and will be able to counteract this fear.

There is no child in the world who doesn’t fear monsters. At least, the vast majority do. With an imagination in full development, children invent beings and situations that are both unthinkable and terrifying.

This is normal for them, so you shouldn’t be alarmed. Just help him stay calm and little by little he’ll get over it.

Water is among the common fears in 6-year-old children. The main reason is that people naturally live on land, not in water.

That’s why children, who are unaware of the dangers, feel insecure when wading in the ocean or entering a swimming pool. They might even be afraid of drowning in their own bathtub.

To prevent it, you must accustom your child to contact with water from an early age. This way he’ll know that you’ll keep him safe and that it’s a way to have a lot of fun.

How to help a child who is afraid

The main action parents should take is to be understanding. The child should be listened to, understood and accompanied at all times when he feels fear.

In addition, it’s helpful to give some element of power, such as a “magic wand” toward of monsters or a pet that “defends” him from evil beings.

We must also teach by example. When warranted, it’s best to show the child how to face one’s fears.

What not to do

Among the things we shouldn’t do when helping 6-year-old children face their fears are:

Faced with these fears, it’s normal for a child to cry and avoid the source of the fear at all costs. If there are symptoms that you believe are excessive, consult with a child psychologist, since it could also be a phobia to something in particular.

Finally, remember that we’re all afraid of something. Therefore, be understanding and put yourself in their shoes to help them overcome their fear in the best way.