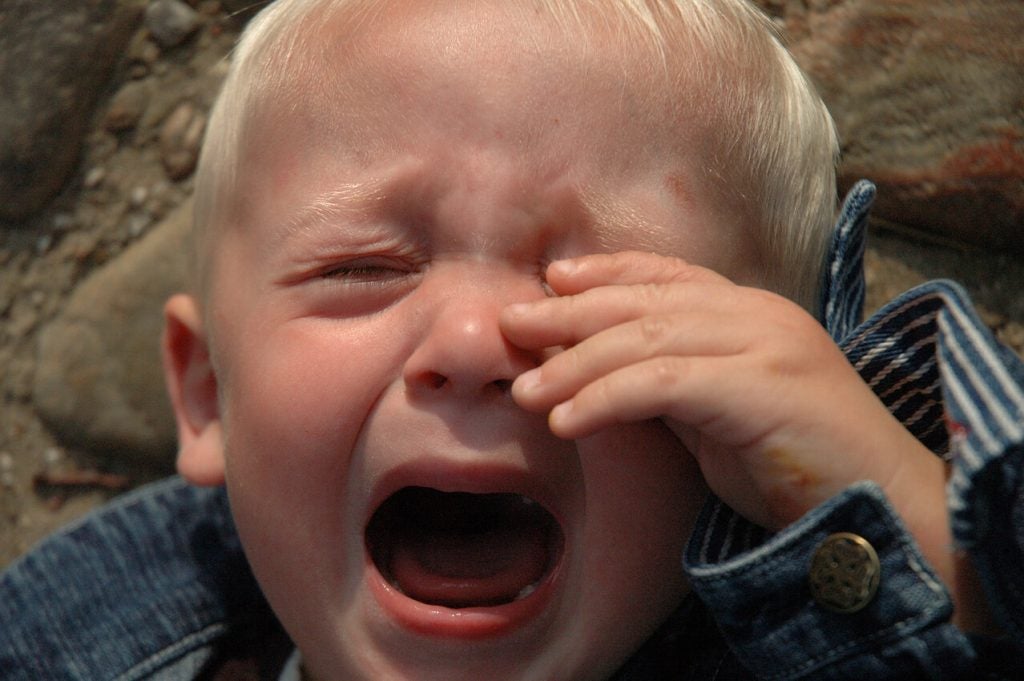 Parents must learn to calm tantrums. It’s no easy task, but fortunately it is just one more phase in your child’s development.

Little by little, your child will learn to get along without a tantrum and to leave that attitude aside, understanding that it is not the only way to get what he wants.

The other great learning stage of tantrums is that a child must accept that not everything he wants can be had exactly the way he wants it or at the exact moment we want it. Sometimes what he wants can even be dangerous.

The most difficult thing for parents is to learn to calm a child who is having a tantrum, and to not despair or lose control of the situation. Therefore, we will tell you about five wonderful techniques to calm even the worst tantrums.

Between the ages of 2 and 3, children have the most tantrums. In this stage, children are aware that on many occasions, their wishes are not fulfilled, and they look for a way to get the attention of those who are denying it.

The crocodile tears and outrageous screams are the resources that children use to say they are not satisfied. They also apply them when they do not understand why they are denied something. This is because they are not yet able to use language to express their frustration and anger.

What is a tantrum?

To begin with, a tantrum is a colloquial word that refers to an outburst. We all know that once it starts, it can be difficult to stop it if we do not have the right tools.

The tantrum usually appears where there is a great burden of frustration, fear or anxiety, and it begins to build inside the child until he is so full of tension that only an explosion can release it.

The accumulation of tension is slow and progressive. Sometimes, you realize that your child doesn’t understand that he is accumulating discomfort, and therefore a tantrum is on the way. Other times, tantrums appear quickly and unexpectedly.

During the outburst, the child is overwhelmed by his own inner anger. The feelings are uncontrollable at this moment, and they make him feel outside of himself. Using his natural defense mechanisms, he lets out tears and screams.

Tantrums on the street should not intimidate us

The best thing you can do while the tantrum lasts is to stay calm. Once he is done, your child will need you to hug him and make him feel safe, because losing control has scared him. Yes, even if you don’t believe it, that’s what happens! You must hug him.

You must find out what has happened to your child. If you see that he is okay and has only had a simple gratuitous and unfounded tantrum, it’s necessary to teach him, calmly, how you want him to behave.

You must find a safe place for your child to be able to vent freely, and after that you should hug and kiss him.

This is basically a “time out.” It is a way of disconnecting from the previous situation, making sure the child understands he will be there until he feels calmer.

This is how to teach a child good behavior, because you convey to him that you understand his annoyance, but that you will only pay attention to him when he calms down.

This helps children distinguish their feelings and emotions during and after the tantrum. In due time they will be able to express themselves when they feel frustration.

A child can teach three things to an adult: to be happy for no reason, to always be occupied with something, and to know how to demand what he wants with all his strength.

Love does not mean permissiveness, but rather to be able to show what you feel for your child. He needs to feel cared for and protected, but also needs to be limited, since those limits will help him grow. Love and firmness must go hand in hand.

Teach him to take a deep breath and count to ten

This technique must be taught when the child is already calm. That way, in the throes of a tantrum, your instruction to “take a deep breath” will not seem strange or new.

It is more useful when you notice that your child is about to get angry and has not yet managed to have a big tantrum.

How to calm tantrums

The best way to avoid tantrums is to know exactly which situations will cause one.

All mothers know that there are things our children are unable to control, and when they are in certain situations, it gets the best of them. For example, there are many children who are very irritable when they are sleepy or hungry.

It is simply about taking certain precautions, not about being afraid of tantrums or avoiding them at all costs. Rather, it is about preventing them from becoming a problem when things are in our control.

For example, if you know your son is prone to throwing tantrums every time he is hungry, the most logical thing would be to respect his meal times as much as possible and/or bring snacks to have ready when the need arises.

Anticipation is about predicting how your child will react to certain situations or circumstances, weighing the possible consequences and alternatives to react in a better way.

Frustration is what provokes most tantrums. The level of frustration predicts the level of the tantrum. It’s as simple as that. If both the mother and child are frustrated, they will not get anywhere until the little one gets tired of crying and screaming.

However, if the mother remains calm and in control of the situation, the child will realize, sooner or later, that he need not continue screaming.

With patience, you can help your little one understand that it is not necessary to be carried away by an outburst; there are alternative ways to react. Your mission is to teach your child to see the other options so that he is not limited to simply breaking into tears when he is denied something.

Often a child throws a tantrum because he cannot find the words to express himself. When they lack words or do not feel understood, they lose control and have a tantrum.

The important thing is that you tend to him and help him feel understood. Ask him a few questions and look for solutions with him.

Calming tantrums is not an easy task, but neither is it impossible. It’s just a matter of facing our children with love and discipline. Cheer up!

David Pau Ausubel, a psychologist and pedagogue born in New York in the year 1918, developed the meaningful learning theory.…