How to Deal with Food Neophobia in Children

Is your child reluctant to try new foods? They may have food neophobia, which is nothing more than an aversion to unfamiliar foods. Here, we'll tell you everything you need to know about it and how to overcome it. 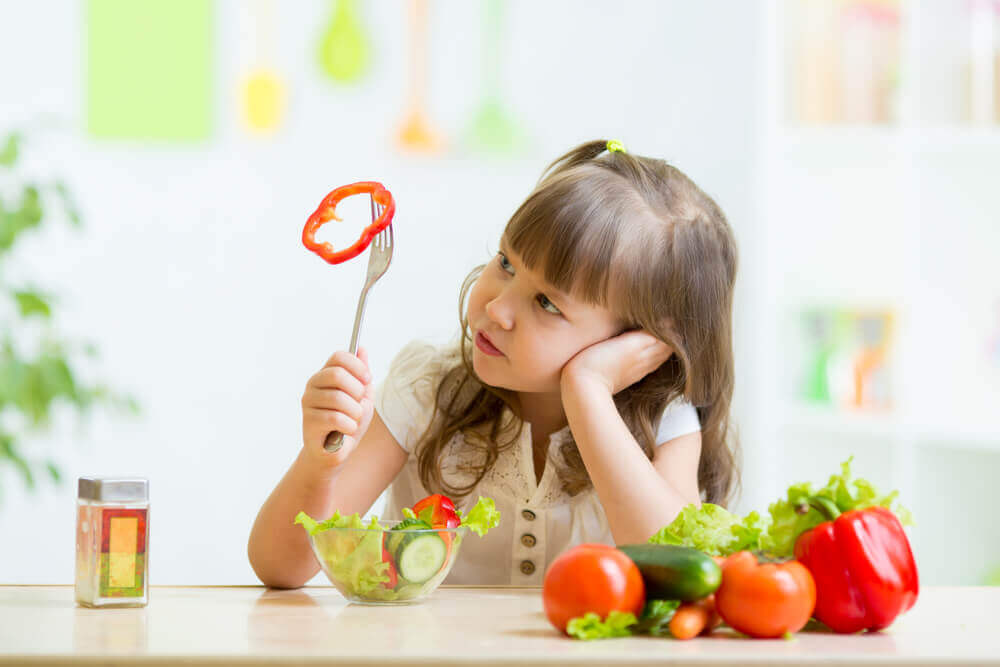 While they may not be familiar with the name, surely all parents know about food neophobia. It is, quite simply, the refusal of children to try new foods.

In this article, we’ll tell you everything about this phenomenon and how you can work to help your child overcome it.

Food neophobia is very common in many children around the world. Although it isn’t included in the category of psychiatric disorders developed by the American Psychiatric Association (APA), it is an extremely frequent behavior.

Curiously, this behavior is related to a primitive defense mechanism of human beings. In times past, man survived by eating plants. Since many plants posed a danger to people’s lives, they needed to be extremely cautious when it came to testing them.

Often, this rejection of new foods by children is due to factors other than merely taste.

Oftentimes, especially from the age of two onwards, this behavioral display in children – which is presented not just in relation to food – is actually an externalization of their growing desire for independence from their parents.

Of course, the reality is that children this age still have very deep ties of dependence with their parents.

In addition to this, childhood is a stage in which children are introduced to new flavors, smells, and textures. It is totally logical that many of them appear strange or unappetizing. However, over time, their views on this may change.

Finally, negative experiences in the past can also be the trigger of food neophobia.

This may be the case for those foods that have previously caused them food poisoning, for example. It can also occur if they have experienced more extreme cases, such as choking or suffocation, as a result of eating certain foods.

What problems can it cause?

Food neophobia can center around entire food groups, such as fruits or vegetables. Therefore, certain nutritional deficiencies may occur that parents need to address and correct.

In this case, a consultation with a nutritionist is essential in order to discuss the special dietary needs of each child and find a solution to the problem. In any case, we should also note that food neophobia is typically a transitory condition.

Although it isn’t a condition for which there are conclusive studies, it is estimated that in most cases, this behavior disappears after 6 or 7 years.

If this is not the case, it can become a serious problem when the child enters school age. Most of the time at school, children don’t have the same opportunities to choose their own meals that they have at home.

How to deal with food neophobia?

As we pointed out before, it’s totally understandable that there are specific foods that a child might not like. However, he or she doesn’t have to dismiss every other food in that food group.

In other words: you may not like apples, but that doesn’t mean that you cannot eat any other type of fruit. The recommended practices for these occasions are the following:

Setting an example is always the best option. If we want our little one to eat broccoli, we should first eat it ourselves. Otherwise, it would be totally unfair to ask for something that we ourselves aren’t willing to do.

Children see their parents as role models. It is easier to instill healthy habits in our children if they see that we’re willing to follow them too.

“Food neophobia is very common in many children around the world. This condition is when children refuse to try new foods.”

2. Be patient and creative

We cannot offer a child a plate full of something they have never eaten before and expect them to finish it. Ideally, start small, with small portions of the new food.

You can also present the new food to your child in such a way that they don’t even notice its presence.

For example, incorporate it into a cake, a soup or cream, or even into a hamburger, in the case of tomato or egg. Through these small steps, you’ll inch closer and closer to your objective.

Additionally, weaning children off breastfeeding by giving them solid foods is effective for prevention of food neophobia. The earlier a child gets used to new food, the less difficult it will be to incorporate it into their diet.

3. Do not force your child

When we force children to do something, the only thing we do is increase their aversion to that thing. In the case of food, we can create true, long-lasting rejections to certain meals. The best thing to do is let time pass and try again in the future.

However, it’s also not ideal to replace food that children don’t like for one that they like more. This could create an association between bad behavior and positive rewards that would only reinforce the behavior.

Finally, it’s also smart to involve children in the purchase of food and the preparation process itself. This, coupled with visually pleasing presentation, can help children overcome food neophobia and encourage them to try new flavors.