From Mother to Grandmother: A Special Experience

When you receive the news that you're going to be a grandmother for the first time, you embark on a new and exciting adventure. 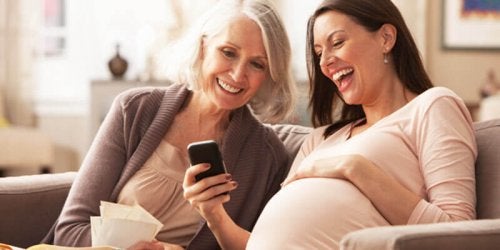 Becoming a grandmother for the first time is a very special event in the life of every woman. It means adopting a very important role in addition to motherhood. In fact, grandparents turn out to be key players in families, especially in our society.

However, this doesn’t mean that as a grandmother you stop being a mother. Even if your children have been parents themselves, no matter how old they are, they will never stop needing your wisdom, experience and support.

So, specifically, what changes as you become a grandmother and what should your new role be?

Being a Grandmother for the First Time

Becoming a first-time grandmother is an unforgettable event in a woman’s life. Yes, you can have more grandchildren, and the arrival of a new member of the family will always be exciting. But with the surprise of the first, you’ll leave behind the phase of being only a mother to embark on a new adventure that is just as exciting.

Expecting your first grandchild will bring you great emotions, but also challenges. For the new grandmother, the main one will be assimilating to her new role.

In addition to growing older, your children are no longer children (although you always see them through mother’s eyes). You’ll have to understand that your responsibilities will not be those of motherhood.

The popular expression says “parents raise, grandparents spoil.” Although it isn’t completely accurate, it does convey one truth: to be a grandmother is not to become a mother again.

As a mother, the main role was to raise and educate. As a grandmother, your mission is to be a guide in the adventures of your grandson or granddaughter.

We previously pointed out that being a grandmother isn’t going back to being a mother. However, due to the similarities of both stages (that of mother and grandmother), some experts point out that when someone becomes a grandmother, the woman experiences a so-called “second motherhood.”

Both the mother and grandmother share the emotions of seeing a new person being born and growing, and have unconditional love towards them. However, as a grandmother, this stage is the opportunity to live the most special moments of motherhood without so many responsibilities.

It’s a time to enjoy and rediscover those moments that perhaps we couldn’t appreciate as mothers because of the worries and obligations.

Enjoy Being a Grandmother

As a grandmother, you’ll have a very important role in your grandchild’s life. To a greater or lesser extent, you’ll inevitably influence that person who will begin to be part of your family.

Logically, you’ll want to give it your best, but if you want to enjoy being a grandmother, you must learn to respect the environment that the parents are creating.

“Even if you don’t agree, respect the decisions that parents make.”

With so many emotions, it’s normal to let yourself be carried away by them. As a grandmother, you already have the experience of a mother, as well as everything that life has taught you.

Naturally, you’ll want to help and use that knowledge to avoid repeating certain mistakes. However, you should learn when it’s time to share that.

Your advice can be very valuable, but you must learn when to provide it. It’s essential that new parents make their own mistakes in order to learn from them.

Lend your support and advice, but respect their decisions, even if you don’t always agree with them. In addition to helping them, you’ll help create a calm and collaborative environment where you can relax and enjoy time with your grandchild.

The Duty of a Grandmother

Being a grandmother doesn’t mean having to bake biscuits and knit sweaters for your grandchild. Each person has their skills and values, and based on them you’ll distinguish yourself as a grandmother.

Remember, your main duty will be to transmit those principles to your grandchild.

You’ll help him discover the world and, through his experiences, discover himself. You’ll have to accompany him on a long and difficult journey, full of adventures and emotions.

Supporting and advising, transmitting the wisdom you’ve acquired over the years, will be your mission. And while you guide your grandchild, you too will learn and enjoy along the way.