What Is High Intellectual Capacity in Children? 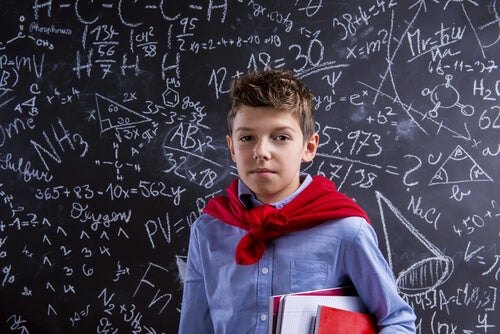 Are you aware of the signs of high intellectual capacity in children? Have you ever suspected that your child may have above average intelligence?

As mothers, we all tend to be a bit biased when evaluating our child’s abilities. But what if your child really does have a special gift?

Below we’ll tell you how to know if a child has high intellectual capacities. We’ll also offer advice on how to guide and educate them throughout their development.

And most importantly, we’ll offer tips to keep your child from getting bored or unmotivated, and help them enjoy the company of others.

What is high intellectual capacity?

High intellectual capacity refers to intellectual giftedness, talent and intellectual precocity. Together, these factors constitute a higher than average intelligence quotient (IQ) of 130 or above.

Intellectually gifted children make up 2% of the population. This means they have an intelligence that is higher than the remaining 98%.

The World Health Organization (WHO) indicates that an IQ of 130 or higher is a reflection of high intellectual capacity.

One characteristic that tends to stand out in individuals with high intellectual ability is creativity.

They possess a great level of imagination, making them very versatile people. They also have great initiative and are able to make effective decisions.

How can I tell if my child has high intellectual capacity?

High intellectual capacity is determined by a complete evaluation that examines the following aspects in detail:

Of course, every individual develops at his or her own pace. But it’s possible to establish some general signs during different stages of development.

Below we’ll explain these signs:

As the child grows, various aptitudes will stand out and catch your attention. At first, this may seem disconcerting, but little by little you’ll start to understand why.

These aptitudes will also be very different from those of other children, providing very important clues.

During early infancy, children are usually not evaluated by a professional. Therefore, parents don’t understand why their child is so different from others.

It’s important to keep one thing in mind: The emotional world of these children.

Children with high intellectual capacities tend to live out their emotions with high intensity. Their reactions may seem exaggerated or disconcerting for most of the people around them.

The characteristics of high intellectual capacity appear before adolescence.

However, some cases go undetected during childhood. The characteristics of high intellectual capacity in teens are the following:

Like all individuals, children with high intellectual capacities need unconditional love and support.

This is the most important thing you need to know. We need to guide them so they can live freely in society and enjoy life.

We should teach our children to have fun, relax, and use tact in their dealings with others.

And we should avoid allowing them to become individuals with a superiority complex or acting condescending towards others. These attitudes, of course, will get them nowhere.