How to Treat and Prevent Nosebleeds in Children

Nosebleeds in children can scare parents, especially if they happen often. Keep in mind that this is completely normal in kids. Medical attention isn't usually necessary as it will stop in time. However, there are certain guidelines you should know about, and we'll explain them in this article. 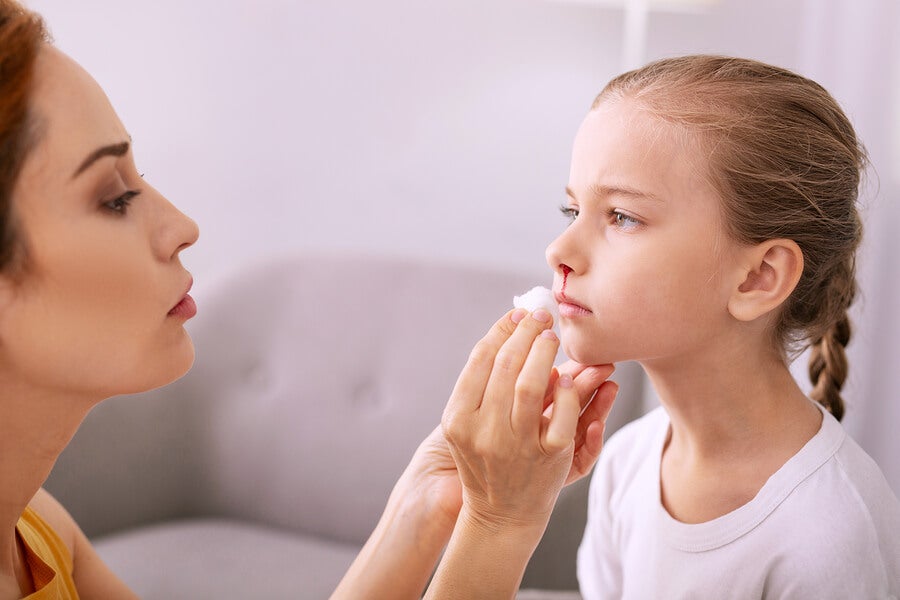 Also known as epistaxis, nosebleeds in children are very common. They mainly occur in children between ages 2 and 10.

Seeing a nosebleed can definitely worry parents, but it rarely ever becomes a serious condition. In general, it doesn’t need medical care and can be treated at home.

Types of Nosebleeds in Children

Internal nosebleeds are the most common. They occur in the front of the nose and when the small blood vessels in the nose break. Then, the nose starts to bleed.

Another type is the external nosebleed. As the name states, it occurs at the back of the nose, which is the deepest part. In this type, blood goes down the back of the throat. In reality, these nosebleeds aren’t common in children.

Causes of Nosebleeds in Children

There are many different causes for nosebleeds in children. The most common one is dry air. Both dry climate and high heat can irritate and dry out mucous in the nose. This creates scabs, which become itchy, and that makes children scratch their nose. Then, the nose bleeds.

Colds are also common causes of nosebleeds in children. They produce irritation in their nasal mucous, which causes their nose to bleed.

Generally, this happens when children blow their nose repeatedly throughout the day. Allergies could also possibly cause nosebleeds.

Finally, injuries, bumps, or falls could also cause a child’s nose to bleed. The same thing occurs that we mentioned earlier. Blood vessels pop in their nose from the hit and it starts to bleed.

How to Treat Nosebleeds in Children

When children’s noses bleed, adults usually panic and worry. When you have to take care of children, it’s very important to keep calm. It’ll help you to remember that it’s nothing serious.

A very common error is to tip the child’s head back. This doesn’t make much sense because then the child could choke on the blood. It could also make them cough or vomit.

Once the bleeding stops, you should wait a little while. While you wait, make sure the child doesn’t touch his nose, stick his finger inside it, or blow it. For the next few days, you should be careful that he doesn’t hurt it again. His nose will be weaker and it will be easy for it to start bleeding again.

How to Prevent Nosebleeds in Children

Preventing nosebleeds is relatively easy. Most are caused by the environment or injuries. It’s important to follow a few tips to prevent nosebleeds:

Another way to prevent nosebleeds in children is by keeping their nasal mucous moist. To do this, you can use saline nebulizers or certain creams. Any of these options helps prevent their nose from drying out and getting hurt.

Finally, if children play contact sports where they could get hurt, we recommend using safety gear so that they don’t injure themselves. Remember that, although you may take the necessary precautions, they could still get nosebleeds.