Isolation at School: What Is It and How to Avoid It?

Isolation at school can lead to serious psychological problems for the victim. Being able to identify it and act on time can help prevent a number of bullying and abuse situations. 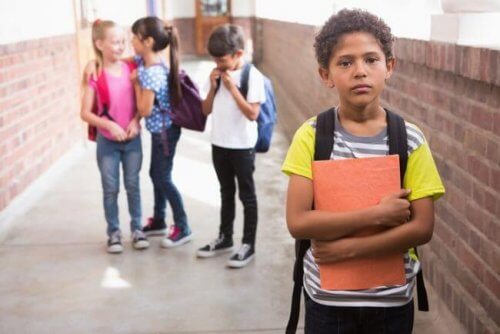 Nowadays, bullying is a hot topic worldwide. Campaigns to end this problem focus on avoiding threats to the physical integrity of minors who might suffer from aggression, humiliation and teasing. In spite of this, there are barely any efforts to avoid isolation at school, which is considered something trivial.

Recent studies conducted by the University of Michigan show that many parents think it’s necessary to put an end to intimidation and violence at school. However, it’s also surprising that there are many parents who consider ending isolation at school to be unnecessary.

From their point of view, only violence or teasing pose a real threat to children. Spreading harmful rumors about other kids, isolating them or making them feel vulnerable seem of no consequence for those who focus solely on physical harm.

What is isolation at school?

Isolation at school consists of socially isolating a child, voluntarily. Often, we don’t detect these behaviors at first glance. Sometimes it seems like the child is shying away from the others, which usually doesn’t reflect the truth.

When a group of children excludes another, it destroys the affected child’s self esteem. They make him or her feel worthless, like he is evil inside and even deserves to be alone. These feelings of neglect often lead to adaptability problems in the future.

Relationships with others can deteriorate in the following stages. This will seriously harm personality development. Avoiding social isolation is a way to end this invisible bullying. We must not forget that emotional wounds can be way more painful than the ones caused by physical damage or teasing.

The isolated person feels helpless in these situations. Even more, he or she might sense people talking about him behind his back, spreading false rumors or treating him hypocritically.

How to avoid isolation at school?

Parents and teachers must take the necessary actions. The behavior of an isolated child is quite specific, and he might feel ashamed of talking with his parents.

They laugh at me because I’m different; I laugh at them because they’re all the same

Talk to the child

If we believe that a child we know might be suffering from isolation, we must talk to him or her. It may take him some time to open up, but he needs to. We must be sympathetic and empathic, so that he doesn’t feel forced.

We can use games, enigmas or jokes so that he forgets his shyness and brings himself to talk. He must feel he’s in a safe environment, where nothing can ever happen. We must highlight that isolation can be just the beginning of a future bullying situation.

Some adults believe that if they minimize the child’s perspective, they’re helping. What they don’t know is that sentences like “that’s nothing” or “come on, don’t make a big deal out of it” are more harmful than good.

Consequently, dismissing the child’s feelings will cause him not to trust adults, which will make things harder.

A child that is suffering needs to know his pain is being taken into account. That it’s not his fault, and least of all that it’s not nonsense. If the adults he knows don’t protect him or offer solutions, consequences can be dramatic.

Analyze if something’s happened with other children

A particular action or behavior might have caused a misunderstanding among the children. If so, teachers should arrange a meeting with those involved so they can express their opinions. Problems are solved much faster this way than at a later stage.

We mustn’t forget that isolation at school can be managed by adults. If there is no cause for the child’s exclusion, we must act. No child deserves to be treated that way, and even less so without any reason.

Link copied!
Interesting Articles
Tips for raising your child
Tantrums in Public: 9 Tips on How to Respond