Jealousy: What To Do When A New Baby Arrives 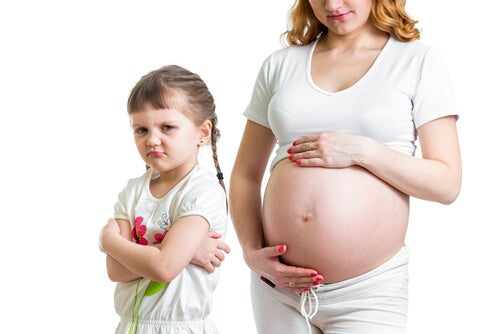 The arrival of a new baby always leads to big changes in family life. Not least of these is the jealousy that can arise between siblings. Particularly those that the older siblings feel towards the newest member.

It’s important to realize that this is a natural and normal feeling that shouldn’t necessarily alarm parents.

As the new baby arrives at the house, the acceptance process starts to take place. At this time the child has to assimilate the different roles of the family members, mainly the parents, but also other possible elements that will enter over time.

Why does jealousy arise between siblings?

Sibling jealousy arises when the emotional bond, that until then united the child with his parents, is threatened by the arrival of a “stranger” who needs extra attention and care.

When children are small, they aren’t even aware of what is happening to them and, in many cases, they aren’t able to control it.

Jealousy between siblings appears spontaneously. Parents need to treat their child naturally, without overprotecting him too much.

You’ll also need to give him a lot of attention, and not think that he can just get over it by himself. In that way jealousy won’t cause more serious problems.

Wetting themselves, not wanting to eat alone, asking for his pacifier or bottle back again, or wanting to spend as much time as possible with the parents. These are some of the characteristic behavior traits that can be triggered by jealousy between siblings.

“I was here first”

The child perceives that the time his parents used to spend only with him has been seriously reduced. The way he or she will try to recover that time is by constantly trying to get your attention.

It’s common that, at this time, children start to behave as they did when they were younger, but this behavior will soon disappear.

To accomplish this, it’s advisable to take the following advice into account:

Excessive worrying about the behavior patterns that generate jealousy between siblings, or trying to make amends for them may actually lengthen this period. Remember that we must give a good example to our children, and transmit security and balance to them.

The role of parents is essential in order to make the child understand that sharing the relationship with their parents doesn’t mean losing it.

The new little brother is here to stay

It’s important to show love and affection equally for the two children. In this way, the first-born will know that, even though the baby needs more attention, he can enjoy other concessions and allowances for being the oldest.

The child can take part in looking after the baby. They can bring their pacifier or diapers, or help cradle them. All of this will make him feel bigger and more useful.

The child will think that you need him in order for everything to work well at home. In addition, it’s important to let him show his affection for the newcomer.

He should be encouraged to come and give them a hug, or to show his class friends the house’s new arrival.

Not only must time be shared, but also toys and everything that makes up the house. The feeling of possessiveness will now greatly increase.

It’s time to lovingly explain to him that everything around him doesn’t belong exclusively to him. He needs to know that his new sibling is on equal terms with him.

Learning this at home will also help him know how to share and coexist with other classmates, especially at school.

Rest assured that not all the changes that the new situation will bring will be negative for your child. In a short time the two will become inseparable.

You can patiently explain to the older one that very soon his brother will be old enough for them to play together. His little brother or sister will surely soon be his new best friend.