How Lack of Affection Affects Children

Lack of affection and attention can have negative effects on children. In this article we'll take a deeper look at the consequences. Take note! 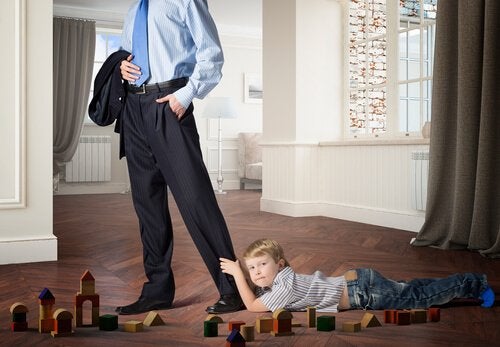 Children need affection when they’re young. If they don’t receive it, it can have very negative repercussions for their personal development. In this article, we’ll review how lack of affection affects children.

Lack of affection affects children in a number of ways, largely because it leads to an absence of an optimal environment. The effects can be long lasting and have important implications for the opportunities that children have later in life.

Children can stagnate cognitively, physically, and emotionally when they don’t receive the attention and affection they need. This happens because they don’t have a paternal figure or don’t have one who is warm and loving enough.

This is the reason that children who lack affection tend to develop multiple personality, emotional, and psychological deficiencies.

Don’t forget that children need many different sensory stimuli to develop normally. They need skin-to-skin contact, hugs, and lots of visual contact and communication. All this helps them grow and develop a healthy brain.

How lack of affection affects children

Below we’ll review the consequences of a lack of affection during childhood. Take note.

If you’re a person who wasn’t given enough attention during childhood, the most difficult relationship you’ll have is the one with yourself. It’s even possible that at times you’ll feel like your own worst enemy. You may be the greatest critic of your own actions.

And, if your life is a constant battle between what you feel about yourself and what you want to feel, you must learn to love yourself. Believing that you’re important and being able to see things in a positive light will transform the way you think about yourself and how you relate to others.

In the second place, childhood is a time that affects your relationships and peer interactions for the rest of your life. If a person has been loved and cared for appropriately, they will probably show those attributes as an adult.

On the contrary, if children have faced only rejection, it’s likely that as adults they’ll develop defense mechanisms. A defensive or excessively protective attitude are two manifestations of  a lack of affection in childhood.

Keep in mind that when you haven’t experienced love, affection, and protection from an adult, it’s likely that you’ll develop defense mechanisms that keep you distanced from others.

Another way that lack of affection affects children is low self-esteem. A lack of affection keeps children from valuing themselves. If they don’t get this initial love, it’s very difficult for them to create the foundation necessary to be able to assimilate what comes next effectively.

Experiencing rejection in childhood or not being loved by their parents leads children to feel that they aren’t worthy of love. At the same time, this causes them to grow up with very low self-esteem.

Insecurity, feeling like a failure, and even self-destructive behavior are some of the possible undesirable consequences.

Developing adequate levels of attachment is essential for an individual’s present and future mental health. Attachment refers to the level of connection established between a child and caretaker during the first years of life.

Children who lack affection often don’t develop the skills necessary to build healthy relationships. This means that children who are deprived of affection early in life can have difficulty connecting with others later on.

It’s truly sad that the life of a child can be affected forever – so much more so if it’s due to a lack of attention, love, and care from parents or guardians.

To avoid this, it’s important that children receive affection from their loved ones. If not, the marks of neglect will be deep, and perhaps last a lifetime.

Emotional Abandonment: Letter from a Daughter to Her Father
Unfortunately, pain is a reality in our society. There are many families that break for various reasons. One of the most heartbreaking is emotional abandonment. Read more »
Link copied!
Interesting Articles
Childhood behavior
How to Handle Impertinent Children