The Unique Language of Adolescents

With instant messaging applications and social media, written and visual language is predominant among teens. One of the consequences is that they have a jargon that's all their own. 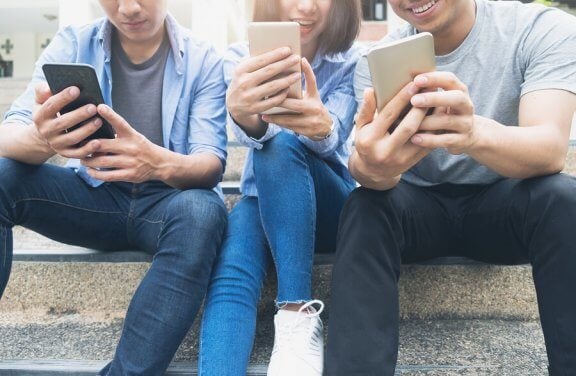 Teens have their own way of communicating which is characterized by the latest trends and new technologies of the digital era. Whether we like it or not, as parents, family members or educators, we need to be in touch with the language of adolescents in order to establish positive communication.

The internet and social media can help us learn about the vocabulary and the minds of young people. In this article, we want to share some tips with you to help you understand the language of adolescents.

Context is king when it comes to the language of adolescents

We’re probably all amazed at the ability that teens have to shorten phrases. When we hear them speak, their capacity to link several ideas into just a few words is incredible. And what’s even more important is that they manage to make themselves understood.

For adolescents, using a large amount of adverbs and prepositions in their sentences doesn’t seem necessary. Their communication is simple, direct and objective. Their only goal in expressing themselves is for others to understand them.

At first glance, this new language of teens can seem a bit limited or lacking. But we should recognize making themselves understood with so few words and so many nuances requires a great deal of interpretation on their part.

By employing such a compact vocabulary, where many words have multiple meanings, context takes on a leading role in communication. Therefore, teens must analyze what surrounds their words in order to capture the message they want to transmit to their audience.

Body language also takes on a new relevance when words are scarce. When teens communicate personally, they tend to use greetings, gestures and facial expressions to send their message. Therefore, they often override the need for verbal or written language.

We can also observe that the language of adolescents places a high value on the images and expressions of the virtual wold. This means they’re able to express their ideas on social media using emojis, gifs (moving images) and other interactive elements that forego written and verbal language.

Language doesn’t reflect the complexity of the message

Another characteristic of the language of adolescents is their ability to separate the complexity of a message from the means used to express it. In other words, youth manage to express their best and worst moods in an amazingly simple way.

They can express their sadness, for example, through a simple emoticon with tears in its eyes. In the same way, they can communicate their love for their partners with an image of a cat with hearts for eyes. But this doesn’t mean that their feelings are less intense – rather, teens tend to be very sensitive and insightful.

They simply don’t need to elaborate the complexity of their feelings and emotions in words to live them intensely.

The density of the message they communicate doesn’t lie in the form or structure of their language. Rather, it’s more about context and who their audience is.

During the 90’s, talking on the phone with friends was one of the biggest trends among youth. But now, in the midst of the digital era, few teens use phone calls to communicate with one another. Written messages are much more the way to go these days.

One interesting fact is that, even with applications that allow for voice recordings, it’s adults who most take advantage of this feature. In general, teens find it much more practical and easy to write short sentences.

The language of adolescents is constantly changing

In the digital age, everything changes quickly and constantly. Today’s generation of teens was born with the internet already in place. As a result, the ways of the internet are part of their beings and they follow its frenetic rhythm.

The communication and language of adolescents is influenced by viral internet trends. The “problem” with their lingo is that once it becomes popular, it quickly goes out of style. Once a new trend becomes viral, the last one is practically and almost immediately forgotten.

Therefore, the language of adolescents is in a state of constant transformation. Every day, new terms and simple abbreviations make their way into young vocabulary. At the same time, other terms and phrases disappear and, organically, lose their meaning.

This is probably the biggest challenge when it comes to interpreting the language that teens use to express themselves. Our greatest piece of advice is that you keep an open mind when you interact with your teens.

Leave criticism and prejudice out of the picture. Remember, who better to teach us how they see and experience the world than teens themselves?

Developing Formal Thinking in Adolescence
Do you know what formal thinking is about? It's a stage of cognitive development that occurs at the beginning of adolescence. Read more »
Link copied!
Interesting Articles
Childhood behavior
Helping Children Manage Disappointment