Latchkey Kids: The Problem with Leaving Children Alone at Home

Not giving your child enough time and attention can impact their personal development. In this article, we'll take a look at what happens when kids are regularly left alone. 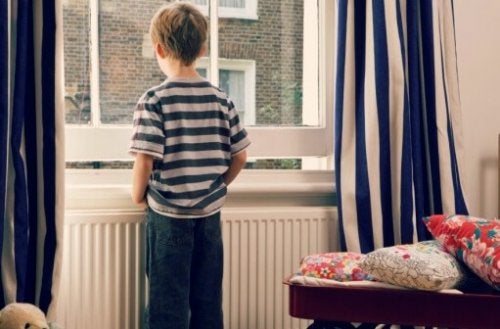 Latchkey kids is the term sometimes given to children who carry the keys to their home around their neck or in their pocket.

They’re responsible for letting themselves in after school, because nobody is at home waiting for them.

As this has become more and more common, a generation of young adults have grown up as latchkey kids.

Concerns about latchkey kids allude to something very important for children: spending time with their parents. This is a key part of their psychological and physical development.

Balancing family and professional life means that, sometimes, parents aren’t able to spend as much time as they’d like with their children. This is becoming more and more common, particularly in large cities.

Being left alone for a large part of the day can lead to behavioral disorders, obesity, depression and difficulty expressing feelings, among other issues.

As a result, academic performance and behavior at school are also likely to be affected.

These are some of the factors that have led to more and more children growing up as latchkey kids:

Now we’ll take a look at the consequences of children being left alone until late in the evening.

These are most serious in children under 12 years of age. This is a very important stage of children’s development.

Symptoms may include visual alterations, such as mild hallucinations or deformation of real objects.

Another consequence is that children are forced into a role that isn’t suitable for their age. In response, the child may develop what is known as an adjustment disorder.

Since latchkey kids have less contact with their parents, they learn to get by all by themselves during the day. This means they have greater freedom and become more independent.

Parents of latchkey kids will often get home exhausted at the end of the working day, without enough energy to even talk to their children.

Moms and dads may even arrive home late at night, when the children are already sleeping.

“What is done to children, they will do to society”

In terms of the parent-child relationship, a lack of quality time spent together can lead children to lose respect for their parents’ authority.

Latchkey kids may become aggressive or arrogant towards their parents, or may display rebellious behavior due to the lack of everyday boundaries.

For some latchkey kids, friends fulfil the role of family. Children who are home alone every day can get a lot of support from their friends.

The problem arises when children surround themselves with friends who aren’t ideal role models.

Children who are left alone will learn to feed themselves. This means they don’t stick to family mealtimes, and may lead to poor diet.

Last but not least, latchkey kids may not feel loved and cared for by their own parents. This makes it more difficult for them to love or trust others.

It may be necessary for both parents to work long hours these days. But, as parents, we can take measures to avoid the distant relationships characteristic of latchkey kid syndrome.

To build a close bond with your child, communicate and exchange ideas. Show an active interest in their life to ensure that the child doesn’t feel ignored.