Learn to Say No Positively 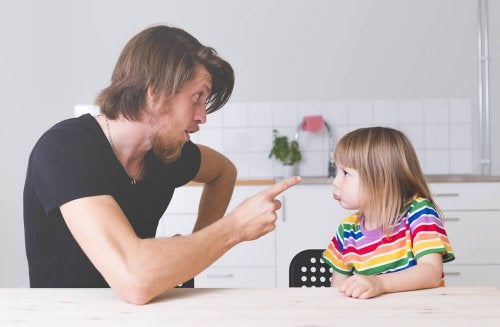 Learning how to say no positively is one of the most difficult things for new parents. Saying no to children when they want something is a big challenge and an important learning experience.

With this in mind, in this article we’ll look at how to say no in a positive way.

Tricks to say no positively

If you’ve ever wondered how to say no to your children in a positive way, read on. There are many different ways for us to express something. And how we phrase a statement can determine what kind of results we get.

For example, it’s not the same to tell your child: “I can’t play, I’ve got things to do,” as to say “help me make the bed, and then we can play.” As you can see, the message is much more positive if we go for the second option.

Keep in mind that parents are constantly saying no to children. If all they hear is “no, no, no,” we can end up giving them a negative message.

So try to use balanced language: tell them what isn’t possible, but also what is.

Saying no to children without being negative

Surprisingly enough, you can tell your child not to do something without even saying the word “no.” What’s more, this is actually beneficial for your child.

If we rephrase our answer, we can help them understand why something isn’t permitted, or not possible.

This way, they’ll learn to understand the reasons behind your rules, making them much easier to follow.

All of this will, eventually, lead to more responsible behavior. Your child will be capable of seeing the consequences of their actions.

As a result, they’ll begin to make decisions independently, and their self-esteem will grow.

If you opt for positive language, little by little you’ll see how your little one’s understanding improves, and you’ll discover and develop their capabilities.

Saying “no” all the time, on the other hand, can mean that children stop paying attention. So, keep this word for when something is really important.

Use it for situations where children may put themselves at risk, such as crossing the road without holding your hand or leaning out of an upstairs window.

When you change the language you use, you’re not suddenly giving your child permission to do anything they want.

In fact, the opposite is true: your answer is the same, but it comes with an explanation that they can understand.

This doesn’t mean never saying no to children. It means making sure that the word doesn’t lose its meaning.

It’s important for parents to apply discipline, enforce rules and build their children’s character. Saying no to children is an important part of this.

You just don’t need to do it with a specific word. Some alternatives to adopt are:

Remember, saying no to children in a positive way won’t just make everyday life a little easier. It will also help them understand why you do what you do, and why it’s important to listen.