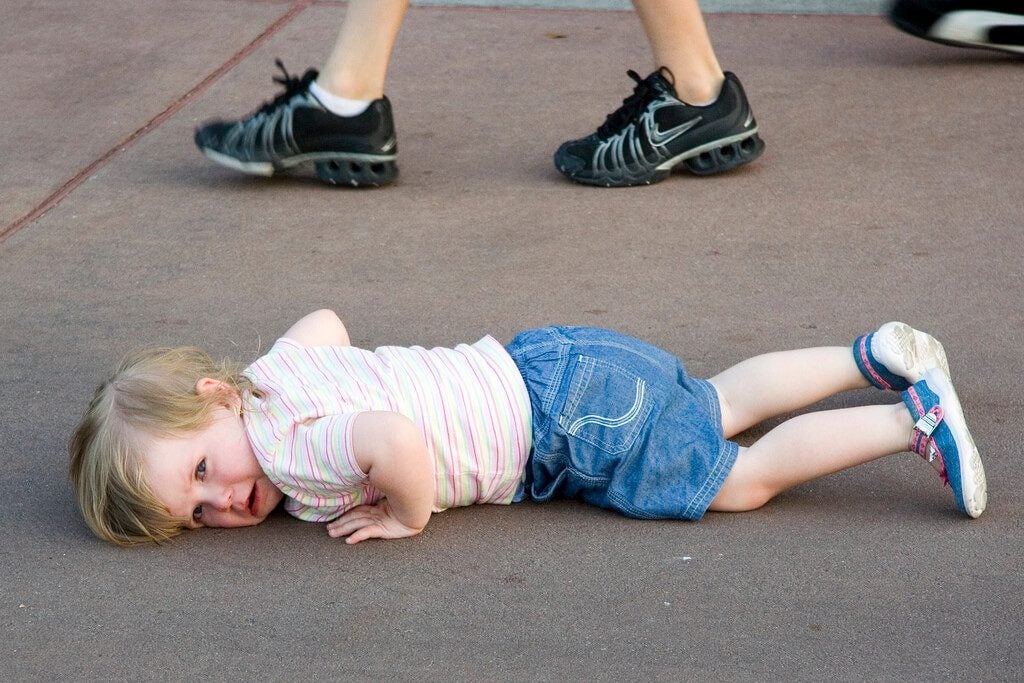 Have you ever heard of the Little Emperor Syndrome in children? It is a psychological condition that alters children’s behavior.

They become authoritarian and try to exercise power and control over the rest of the family members.

Little Emperor Syndrome in children is a relatively new phenomenon, also known as Oppositional Defiant Disorder (ODD). The children who express it try to obtain power and impose it on all the people around them on a day-to-day basis.

The parents of these children have real problems when it comes to making decisions that go against the child’s wishes. This can even be in trivial matters, such as choosing which TV channel to watch or what food to have for dinner.

Of course, this also extends to wider issues, such as where to go on holiday, the purchase of new toys or even the decision about whether to have a new sibling or not.

How to detect the Little Emperor Syndrome in children

As its name indicates, this syndrome is characterized by the child refusing to let another person make decisions for him.

He wants to feel permanently in control of his surroundings, and if he doesn’t feel that he is, he usually resorts to aggression.

Here’s what often occurs in these situations:

Why does this syndrome occur?

Researchers point to the theory that this problem is caused by the limited amount of time children spend with their parents and other adult relatives. The causes seem to be much more social than biological.

There is an undeniable fact that ratifies this idea. Children are not born tyrants, but rather they become this as the years go by. According to experts, moreover, the average age of children who have this syndrome is going down and down.

What do parents’ working hours have to do with the Little Emperor Syndrome in children? Well, it seems that the lack of time shared with their children leads to them not being able to establish clear boundaries in parenting.

In addition, there is a feeling of guilt that makes them consent more than they should to their child’s requests and whims. Because of this, children detect that it won’t be a difficult job to manipulate them.

It’s not something that occurs just with an only child. In fact, there are many children without siblings who have been properly raised and don’t suffer from this psychological condition.

In the same way, there are also little ones with siblings who try to control them and their parents.

The first thing that must be resolved is the use of violence. Whether this be towards parents, brothers, teachers or school authorities, it must be stopped.

To achieve this, the example and hard work from the parents is fundamental. The importance of dialogue, respect and tolerance must be conveyed.

On the other hand, you’ll also need to work a lot on instilling empathy in the child. This means you have to teach them to think about how others feel in each situation, and how they can react positively to this.

Also, perhaps the most important point is to set boundaries and limits right from the start.

At all times, the child must understand that there are rules of conduct, both at home and in other institutions. He must realize that he has to comply with these rules and let them govern his life.

In children where this teaching goes smoothly and yields results, it’s also important to implement positive reinforcements. Recognition and rewards for following the rules will make the child carry them out with greater positivity and ease.

Of course, there is one last aspect that is as central as it is non-negotiable: time.

Having parents there with him, and exercising their true role will prevent the child from suffering from Little Emperor Syndrome at some point.

He’ll know that his parents are there, they’ll take care of him and that he must respect them.

School and the adolescent years

We’ll finish off by mentioning something which is becoming increasingly common these days.

Teachers, quite naturally, often object to the demands of disobedient students. In return, they often receive complaints and even abuse from parents, who question their authority and their decisions.

This only promotes the Little Emperor Syndrome in children. Once again, the child uses his power of manipulation to get away with these demands and uses his parents for his own benefit.

There is also something similar that happens in adolescence. By this time, the children are already unaware of the limits and strongly believe they can always get their way.

This can lead to violent behavior towards parents and friends. It’s essential to seek professional help if this occurs.

In short, on the one hand parents need to guarantee that their children don’t lack anything while they’re growing up.

But, on the other hand, they should never be afraid to establish rules and limits. If not, then your child’s studies, future work, and social development will be severely affected.