This famous short story stays current since it teaches children ways to protect themselves and their loved ones. 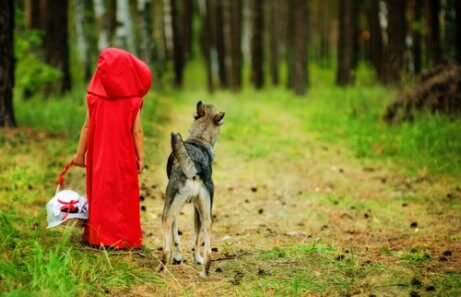 Although Little Red Riding Hood may seem like just the story of a girl who must go across the forest to visit her grandmother and ends up saving herself from the trap of an evil wolf, this children’s tale represents so much more.

We’ve all heard the story at least once in our lives, but have you ever stopped to think about the values it teaches children? Next, we’ll review the 5 main teachings and values of Little Red Riding Hood.

The Forest as a Dangerous Setting

The beginning of the story consists of presenting the little girl who has to visit her sick grandmother. To do this, she must go across the forest carefully, for many dangers await.

During the journey, she comes across the evil wolf who asks her where she is going and convinces her to race him to her grandmother’s house. In some versions, however, he turns to the beauty of the landscapes and flowers to divert her from the original path.

The wolf, so malicious and clever, shows Little Red Riding Hood a “shortcut” which turns out to be the longest way. He therefore arrives sooner, eats grandma in one bite and disguises himself in her clothes.

In its earliest versions, the tale had a tragic and heartbreaking ending for Little Red Riding Hood. It even presented sexual consequences for the girl. It was written like this because its goal was to show and generate caution in the little girls of those societies.

According to the Grimm brothers’ version of the story, less cruel and explicit than the previous ones, the girl was about to end up the same way as her Grandma, had it not been for the brave lumberjack who rescues both of them by extracting the old woman from the wolf’s belly.

What can we learn from the story of Little Red Riding Hood?

1. Not to Trust Strangers. This is clearly the moral of the story. Despite the so-called good intentions the wolf presented to Little Red Riding Hood, he had a hidden agenda.

2. Not to Share Personal Information. In her encounter with the wolf, Little Red Riding Hood gave details about her destination, the reason of her journey and the contents of her basket.

This is a huge mistake, since that information which seems harmless, can be used by criminals to hurt us or our loved ones. Nowadays, this danger is constantly present in social media.

3. Not to Disobey Our Parents. One of the recommendations from Little Red Riding Hood’s mother when she left home was to be careful walking through the forest and not to move away from the main road.

This, of course, was forgotten by the innocent child who falls right into the wolf’s trap and takes the shortcut he suggested.

4. Not to Lower One’s Guard. Beyond the wolf’s lie to trick Little Red Riding Hood, the story mentions many distractions she had.

She never mistrusted the road the wolf showed her and she didn’t realize what was going on once she arrived at her Grandmother’s house, even when the classic questions about the prominent face features of the wolf in an old lady’s disguise are mentioned.

A Lesson for Parents

From a different point of view, we can add another moral to the story. This one, however, is not for children, but for parents: Don’t neglect your children regardless of how safe a situation may seem.

Even when the mother gave clear warnings to the child, that didn’t prevent her life from being in danger. It’s important to stress  that parents must never take their children’s safety for granted, it doesn’t matter how independent and responsible they seem.

The wolf is a character that goes beyond the looks of the animal. It’s about the embodiment of an evil, savage and malicious being. In our present time, it would be represented by people who lack certain morals and values.

In fact, in older versions of the story, the figure of the wolf was directly replaced by people. The metaphor of the animal was then omitted to make direct allusion to the wickedness of some people.

Finally, we can describe the lumberjack as the protector who appears to guarantee the safety of the characters. Nowadays, we would represent him with the image of the police or any figure who can take part in preventing a crime.

As we mentioned before, the character of the lumberjack was added to the tale, which in the beginning had a tragic ending to achieve a more realistic representation of the dangers from the outside world.

The story of Little Red Riding Hood stays current since it teaches children about an essential topic in life: safety. No one is exempt from the dangers of society, and it’s necessary to learn to take care of oneself and be careful.