What You Should Know about Losing Baby Teeth 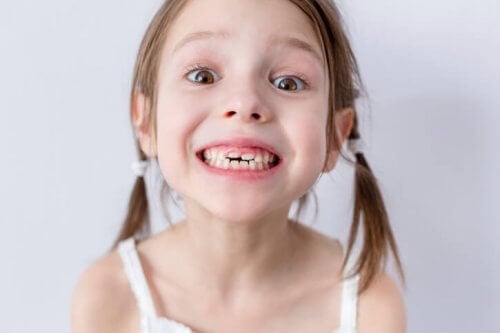 Losing baby teeth is a process that usually begins when the child is between 5 and 6 years of age. Of course, the starting age can vary according to the child’s genetics.

It’s important for parents to inform themselves about this process and to be alert to changes that require a visit to the dentist.

What you should know about losing baby teeth

The teething process begins around 6 months of age. This is, however, an estimate since every child is different.

From that moment until approximately 2 or 3 years of age, all the milk teeth come in.

Until the child reaches 5 or 6 years, no visible change occurs in the mouth.

However, many changes are occurring internally. The gums are preparing to expel the milk teeth and replace them with the final teeth.

After this renewal process begins, it will take around 3 or 4 years for the teeth to be replaced.

Although baby teeth begin to fall out at approximately 5 years of age and this process of definitive change can take up to 4 years, in reality it doesn’t really end until the age of 17 or 21.

The reason? It’s precisely at this time that the third molars, better known as the wisdom teeth, begin to emerge.

In what order do the teeth fall out?

As a general rule, the first teeth to fall are usually the first milk teeth that appeared.

Generally the first baby teeth to fall out are the lower incisors, followed by the upper central incisors.

The lower incisors are found in the inner and lower part of the gum and are usually the first to be seen.

They push the milk teeth until they’re expelled and leave enough space for the final tooth to grow.

The second permanent teeth that usually come in are the upper central incisors. In this case, they come out through the front of the gum.

The first and second molars are among the third group of teeth to usually come out. In this case, the loss of the first molar usually occurs between 9 and 11 years of age.

On the other hand, the loss of the second molar occurs between 10 and 12 years.

On the other hand, the canines usually fall at the same time as the second molar.

In other words, this process occurs around 10 and 12 years of age.

Of course, these changes can vary from one child to another, since issues such as genetics can play a role.

What to do when baby teeth begin to fall out

As we’ve seen, the process of replacing baby teeth with permanent teeth begins around the age of 5. There are parents who make the mistake of forcing the movement of teeth to accelerate their fall.

However, this is not recommended, since it can be a long time before the tooth comes out after it first begins to wiggle.

In this sense, it’s important to tell the child to avoid moving or touching the loose tooth with his or her tongue.

The idea is to let the tooth come out completely naturally, since this way the process will flow much faster.

The first teeth to fall are usually the first milk teeth that erupted.

In case the tooth is so loose that it bothers the child to talk or eat, it’s advisable to go to the dentist.

The dentist should be in charge of removing the tooth and making sure the growth and development of the permanent tooth isn’t hindered.

It’s important for parents to get involved in the whole process of losing teeth. Getting informed is the first step to recognizing if there is any problem or delay in the development of the permanent tooth.

In this case, it’s best to go to the dentist again.