Why Are Maternal Grandmothers So Important to Children? 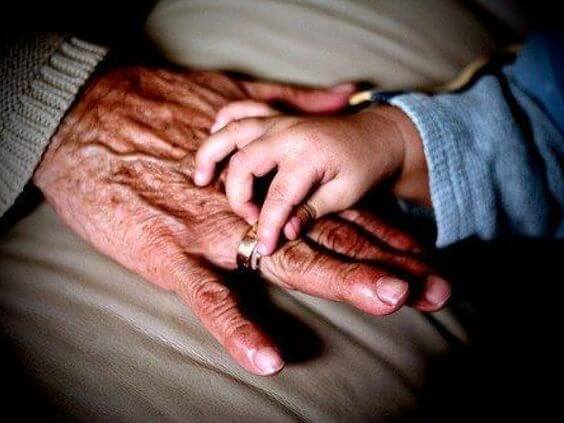 There is a special connection between maternal grandmothers and their grandchildren, which is not surprising. They are very important figures in children’s lives for several reasons, not only in the emotional aspect.

Many people don’t spend a lot of time with their grandparents. They don’t live with them, and may hardly know them. Despite this, the bond with grandparents is for life.

Maternal grandmothers have a unique role in the family; they’re often thought to have more of a direct responsibility to their grandchildren than their other grandmother does.

Their influence crosses generational lines with the values and teachings they provide.

A maternal grandmother is also very important from a genetic point of view. We’ll elaborate on this below.

Could science explain the connection that we have with our maternal grandmothers? Or is it just an emotional and moral matter?

How does science explain the importance of maternal grandmothers?

According to the theory of Alejandro Jodorowsky, a Chilean essayist; no matter how much of an affinity you have for your maternal grandmother or the childhood memories you have of her, you are attached to her through your genes.

According to this approach we should look closely at how a child has been influenced by her.

Apparently, the genetic load that is passed on by the child’s mother comes directly from their grandmother. Out of all the grandparents, she is the one who participates the most in this inheritance.

When it comes to genes, they don’t always get passed on to the next generations; some skip a generation. For this reason, it is possible that some children tend to look more like a great aunt or uncle or their great-grandparent than their own parents.

Maybe there is no physical resemblance, but there has been some mark on them at the genetic level. Sometimes this genetic footprint is easily seen, such as with a mole, the eyes or the way of walking.

There are also internal markings, for example in bone structures, muscles or maybe certain genetic diseases.

Of course some aspects have nothing to do with childhood. It is not as if our children will do the same thing they learned from their maternal grandmother. It is certainly something they inherit through blood.

And yes, science has an explanation. In this case, grandchildren have already been in their grandmother’s womb.

When a fetus forms in the maternal womb, it receives a lot of biological material from the mother. Although both parents contribute 50% of the embryo’s genetic material, in order for it to develop, it must get its nourishment from the mother.

Meaning that even when the father’s involvement is over, the mother’s is still participating.

Maternal Grandmother in Every Sense of the Word

If according to DNA the grandmother participated in the formation of her grandchild in some way, then her traits could be transferred to the child.

However, Jodorowsky explains that it is not only physical characteristics that are inherited. Apparently the emotional experiences of the maternal grandmother can also be inherited.

The oocyte from which your child was born carries a genetic load from your mother. All your children will inevitably have the same genetic material. This is why in some way links are formed capable of transcending dimensions.

According to the essayist Jodorowsky, the emotions that the grandmother felt while she was pregnant with her daughter were passed on to her and perhaps also to any future grandchildren.

Emotional influence can remain active in DNA, even if it skips a generation.

As we know, the mitochondrial DNA information, the DNA that comes from the mother, is greater at the moment when the embryo is formed.

The father’s sperm doesn’t contain this kind of information, so the paternal grandparents don’t play as much of a role. Despite this, some genetic studies suggest that the father’s DNA is much more dominant in relation to inherited traits.

Similarly, from a rather sentimental point of view, in most cases maternal grandmothers are much more involved with the pregnancy, childbirth, and parenting of their grandchildren. To most people, the importance of this figure is undeniable.

We may not know exactly what we inherit from our grandmothers, but their presence in our lives is undeniably valuable, no matter how you look at it.