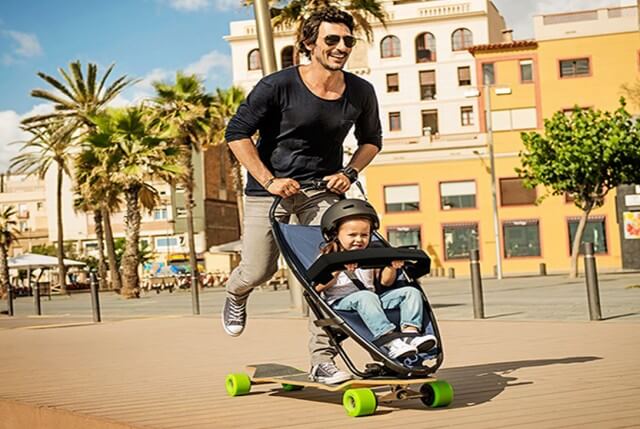 The role that fathers play has changed over the years. Modern dads are now actively involved in their children’s upbringing.

They’re well aware of the many tasks that have to be performed at home, ranging from rough and tough tasks to rocking the baby in their arms. Modern dads know that their presence at home counts a lot.

In the last few years, fathers have left behind the mere role of the provider or simply the reproductive tool. They’ve opted for a more conscious and nutritive role which enriches the bond with their children.

Nowadays, fathers are a lot more active and involved when it comes to raising their children. Many men begin to become emotionally involved from the moment of conception.

They accompany and support their partner closely and constantly throughout the whole pregnancy.

The days of the “lazy dad” are over

According to studies conducted by the Census Bureau of the US government, the number of fathers who stay at home to take care of their children have doubled in the last decade. This occurs while more women are joining the work force.

The number of fathers opting for more flexible jobs or choosing to work from home after evaluating the situation with their partners has increased considerably. They decide to put their careers on hold to raise their children.

There have been studies conducted in Europe and Latin America that also affirm the emergence of this new type of father who shares a tight bond with their children. The trends indicate that men are enjoying the experience of being committed parents more and more.

They’re very affectionate and completely involved in their children’s education. There is also a significant amount of fathers who decide to sacrifice their salaries or professional development in order to devote all of their time to their families.

The generational shift is imminent

Many fathers believe they have a much closer relationship with their children than they did with their own fathers.

They also feel that there is a need to increase the amount of time off that fathers get. This will allow them to spend more time with their children after childbirth.

These new fathers are interested in establishing concrete policies that will allow them to spend more time with their families.

More and more men are becoming aware that the tasks and roles in a family don’t always have to depend on gender.

Women have taken strong steps towards professional development. This has allowed more space for men to participate in the tasks that were once only attributed to mothers. Tasks such as domestic chores and raising the children.

Fathers are slowly becoming more responsible for taking care of the baby as well.

This new cooperation and equality is not only beneficial for women but also for men. Modern dads now have a chance to enrich their human experience through encounters with more intimate moments of enjoyment with their children and family.

The emergence of a new model that breaks with the role of the traditional father is imminent. Modern dads are committed and active when it comes to parenting. They also enjoy close bonds with their children and families.

Modern dads are breaking stereotypes. The task of raising and caring for little ones no longer depends solely on mothers.

Today fathers are more involved in the effort to become better parents. This includes spending more time at home collaborating with the construction of a home that is full of values and love.