Everything You Need to Know About Moles in Children

If you want to know about the symmetry, size, color and evolution of moles in children, continue reading. The information in today's article will help you identify abnormal symptoms. 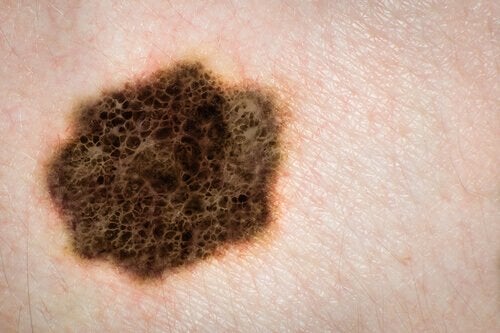 It’s important for parents to know about the different types, characteristics and warning signs of moles in children. Keep reading to get informed.

Moles are small spots that can vary in color and that usually have a circular or oval shape. Scientifically known as melanocytic nevus, they can exist on any part of the body. At the same time, they can appear anywhere from between the epidermis and subcutaneous tissue.

It’s important to always treat moles with care. Even though they’re benign tumors, they still require special treatment. And of course, then comes the question: What special care do moles require in children?

Moles, or nevi, are most common among individuals with pale skin. However, people of any skin tone can experience these spots on their skin. Therefore, it’s important to know what they are and how to care for them. It’s also important to know their type and shape.

As we mentioned above, moles are actually benign tumors. In other words, they’re tissue alterations that lead to the growth of lumps or changes in the skin’s coloration.

Everyone can have moles, even those with the darkest skin. However, it’s true that those with paler skin present the highest rate of moles on their skin.

On average, an individual of adult age can have some 20 moles. Children can present at least half of this number. The amount of moles a child has can increase and decrease over time.

The main characteristics of moles in children

One of the main characteristics of moles is that they’re asymptomatic. In other words, they shouldn’t itch, burn, or ooze liquids.

The second characteristic that they have in common is their color. In general, they’re brown, though their exact tone and darkness can very. In a smaller number of cases, they can be red in color (known as blood hemangiomas) or even blue.

As for their shape, they tend to be circular or oval shaped. They can be flat, single-toned, and very small (about 5mm). At the same time, they can be large (8 to 10mm), bumpy in their texture, and raised.

This section is extremely important. The term “melanoma” comes up often when talking of moles in children and adults alike. Melanomas refers to skin cancer, which happens to be one of the most common diseases in the world.

Their link to moles is due to the fact that, to the eye, they look practically the same in their first stages of appearance. However, later on, they stand out because their shape and color become more asymmetric.  This doesn’t generally occur, however, in the case of healthy moles.

Is there a way to prevent the appearance of moles?

It’s clear that, depending on skin type, some children are more prone to have and develop new moles. However, other factors also play a role.

For example, experts believe that frequent and prolonged exposure to sun rays can lead to the appearance of nevi.

In that case, we should protect our children from sun exposure, especially between the hours of 11am and 3pm. Be sure to always apply an adequate amount of sunscreen and avoid prolonged exposure to the sun.

What types of moles can be removed?

As we mentioned above, benign tumors are asymptomatic. They don’t present physical discomfort in and of themselves.

However, some people feel that moles are an aesthetic problem – that is, they’re unpleasant to the eye. For that reason, they may ask a dermatologist for mole removal.

As for moles in children, it’s best not to touch them at all. If they bother your child, itch, hurt, or are reddened, you should speak to your pediatrician or pediatric dermatologist. A medical professional will be able to determine proper treatment for your child’s particular case.

Now that you know more about the characteristics of moles, you can be more attentive to their appearance in children.