Narcolepsy is a lifelong condition that affects many children. Find out more about this disease and how it affects kids' day-to-day lives. 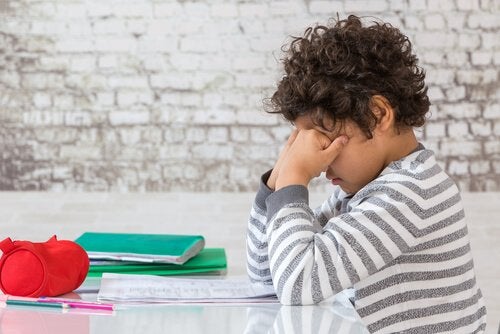 Narcolepsy in children is a condition of excessive sleepiness that can affect different aspects of life. This includes how kids function socially and academically.

It affects approximately 1 in 2,000 people. Most signs occur during early childhood and adolescence.

Narcolepsy is a lifelong condition that can damage relationships with friends and family. Although narcolepsy doesn’t influence intelligence, it can affect memory and learning.

Narcolepsy in children is related to an alteration in the part of the brain that controls sleep and wakefulness.

In many cases, it’s considered to be due to a lack of hypocretin. This is a particular chemical in the brain.

What causes narcolepsy in children?

Narcolepsy is caused by a loss of cells in the central nervous system that produces the sleep hormone hypocretin.

Although we don’t know what causes the loss of cells, it’s thought to be due to an autoimmune condition, at least in part. There are certain genetic markers that can help determine if a patient really has this condition.

However, even if an individual doesn’t have any of these markers, they can still have narcolepsy. On the other hand, if they do have them, they’ll definitely develop this condition.

Signs of narcolepsy in children

1. Excessive sleep during the day

This is usually the main sign of narcolepsy in children. They feel tired all the time. In fact, they may fall asleep at unusual hours. For example, in the middle of a conversation or while eating.

Cataplexy is a sudden and brief loss of muscle control. It’s triggered by stress or strong emotion, such as laughter, anger, anxiety or surprise.

This can be mild, such as a brief feeling of weakness in the knees. Or, more significantly, it can cause a total collapse to the floor since they can’t hold themselves up. Certainly, it doesn’t affect breathing, but it can make children feel suffocated.

Sleep paralysis is a loss of muscle control, either when children fall asleep or wake up. It causes a feeling of not being able to move or speak.

However, they’re totally aware of their surroundings. If another person touches them, it usually makes the paralysis go away.

These are vivid dreams or nightmares that are difficult to distinguish from reality. They happen just before falling asleep or after waking up.

Dreams often involve images or sounds of strange animals or predators. Certainly, this can scare children very easily. Often, they occur in combination with episodes of sleep paralysis.

Children may perform their usual routine without any knowledge that they did them. For example, write a letter, do homework, cook or clean.

Other symptoms children with narcolepsy may experience are: memory loss, lack of concentration, low motivation, slowness, difficulty to keep up with friends, and school work.

“In each child you should put a sign saying: ‘Handle with care, dreams inside.'”

There are treatments to help control symptoms so children with narcolepsy can lead an almost normal life.

Prescription medications are available to treat excessive sleepiness during the day, cataplexy, sleep disorders and hallucinations.

The doctor may help you mix and match nap schedules with medications. Together, they can effectively help reduce drowsiness.

Children must follow a strict sleep schedule that ensures they get enough sleep for their age. This includes short naps during the day, if necessary.

It’s also a good idea for children to avoid activities that may be dangerous for their health or life. Some of these are driving, swimming, or cooking, except times when they know they’ll be alert.

If your children suffer from narcolepsy, tell close friends, relatives and co-workers about their condition.

It’s especially important to tell those who have direct contact with them. Tell them about the disorder and how it can affect their day-to-day life.

In short, narcolepsy in children is a very common disorder. We recommend taking your children to the doctor if you think they have this condition. Ask the doctor as soon as possible to create the best action plan.