Nosebleeds in Children: Causes and Treatment

During a nosebleed, blood flows from one or both nostrils. Nosebleeds are very common in children and, in most cases, aren't cause for alarm. Find out more about them in this article. 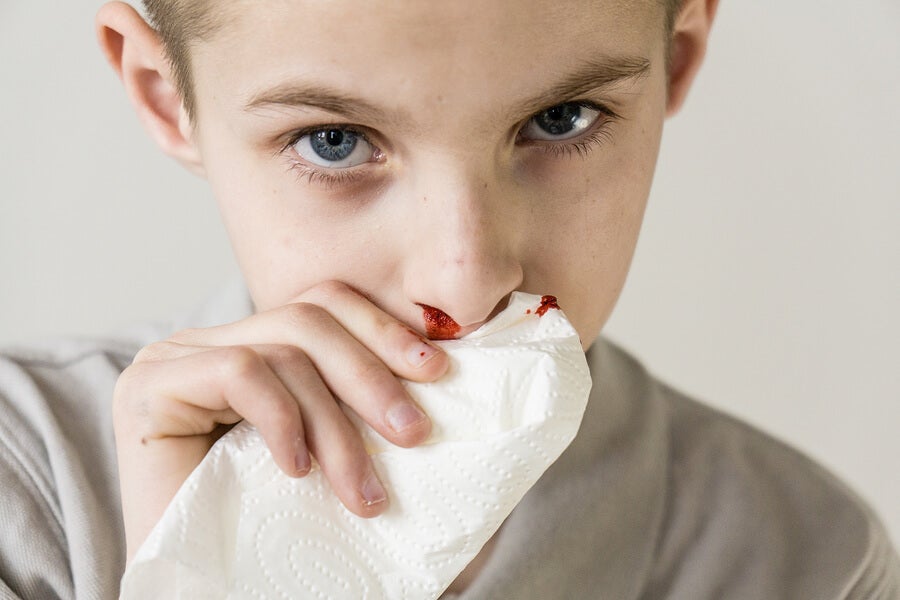 When your children suddenly get nosebleeds, it can be surprising. In addition to the urgency of cleaning up the blood, you probably also wonder what caused it.

Fortunately, although nosebleeds in children can seem dramatic, they’re usually not serious. However, frequent or severe nosebleeds may indicate more serious health problems, such as high blood pressure or a blood clotting disorder.

Consequently, they must be controlled. Excessive bleeding over a prolonged period of time can also cause additional problems, such as anemia.

Why Does My Child Get Nosebleeds?

The inside of the nose is filled with small, delicate blood vessels that can be damaged and bleed relatively easily. Therefore, nosebleeds can happen if the child’s nose becomes irritated due to dry air, nasal medications or some type of infection.

Nosebleeds can occur spontaneously when the nasal membranes dry out and crack. This is common in dry climates or during the winter months when the air from home heaters is warm and low in humidity.

Children are more susceptible to nosebleeds if they take medications that prevent normal blood clotting. In this situation, even minor trauma can cause significant bleeding.

Certainly, the rarest causes of nosebleeds include bleeding disorders and other systemic diseases. The most common causes are:

How to Act if Your Child’s Nose is Bleeding

You can help reduce your child‘s nosebleed by sitting them in a chair. Then, follow these steps to stop the blood:

“Frequent or severe nosebleeds may indicate more serious health problems, such as high blood pressure or a blood clotting disorder.”

When to Go to the Doctor for a Nosebleed

In the following cases, it will be necessary to go to the emergency room:

Tips to Prevent Your Child from Getting Nosebleeds

Finally, remember that even with proper precautions, children can have a nosebleed from time to time. So, if your child’s nose bleeds, try not to panic. In general, these types of hemorrhages are harmless and in most cases they are easy to stop.