Paracetamol for Children, All You Need to Know 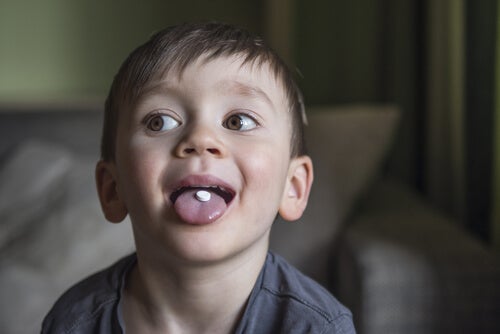 In this article, we’ll share with you key information that all parents should know about the use of paracetamol for children. When the proper measures are followed, it could be a great medication for our little ones.

Be it under any brand name, this medication is often used to treat the flu and it can be found in most medicine cabinets at home. As adults we use it regularly, however paracetamol is also available for children.

The fact that paracetamol is generic, commonly used and only has few contraindications doesn’t mean that it should be used indiscriminately.

Special care should be taken when it comes to the youngest member of the family. Be careful with the administration of this medication and with self-medication.

What is paracetamol and what is it used for?

Paracetamol is an analgesic and antipyretic medication that is widely used. It can be used to relieve general malaise and recurrent joint pain caused by the flu. It’s also used to control fever and other types of pain.

Unlike other analgesics, its use doesn’t produce counterproductive effects in the midst of complex viral process.

Paracetamol for children typically comes in the form of syrup or chew-able tablets. They can be bought in the pharmacy without a prescription.

Parents also have a third option when it comes to paracetamol if their child doesn’t want to take it orally. It also comes in the form of a suppository.

When it comes to the suppository, there are different concentrations available according to the child’s age and weight. For example, children 6 to 36 months old can use 80 mg of paracetamol. A suppository can be used every 6 hours.

The greatest advantage of this medication is that it has very few contraindications. The only population at risk are children who have liver diseases or liver development disorders. In these cases, consult your doctor before administering paracetamol.

In addition, patients who are allergic to anti-inflammatory medication rarely experience reactions when it comes to acetaminophen.

Children who are suffering from a viral illness can use acetaminophen safely, so can pregnant women and infants. Babies under the age of six months should only be administered this medication after a doctor’s approval.

How to correctly calculate your child’s paracetamol dose?

The concentration of the medication and the child’s characteristics are two important variables to consider when it comes to calculating the correct dose. Parents can also use their child’s age if it gives an approximate reference about the child’s weight.

Children who weigh between 11 and 16 kilograms can take a dose of 5ml if the syrup has a concentration of 160mg. If their weight is between 16 and 21 kilograms, the appropriate dose is 7.5ml.

Children who weigh between 22 and 27 should take a dose of 10ml if the syrup has a concentration of 160mg. As you can see, everything depends on the presentation of the medication. Doses vary depending on if it comes in chew-able pills, syrup or suppositories.

A formula that doesn’t fail

Therefore, if the child weighs 10kg we add 5kg and this gives a total of 15kg. Next we divide the sum by 10 and that gives us 1.5ml. This is the amount of syrup that the child should ingest every 6 or 8 hours.

Keep in mind that this medication should not be used in children under the age of 6 months, unless it’s prescribed by their pediatrician. Consult a trusted specialist and avoid self-medication.

In conclusion, acetaminophen is safe, there are only a few contraindications when it comes to children. Perhaps its only setback is that it doesn’t have an anti-inflammatory function. However, it’s still an effective way to treat general malaise.