Parents Should Argue Away From Their Children 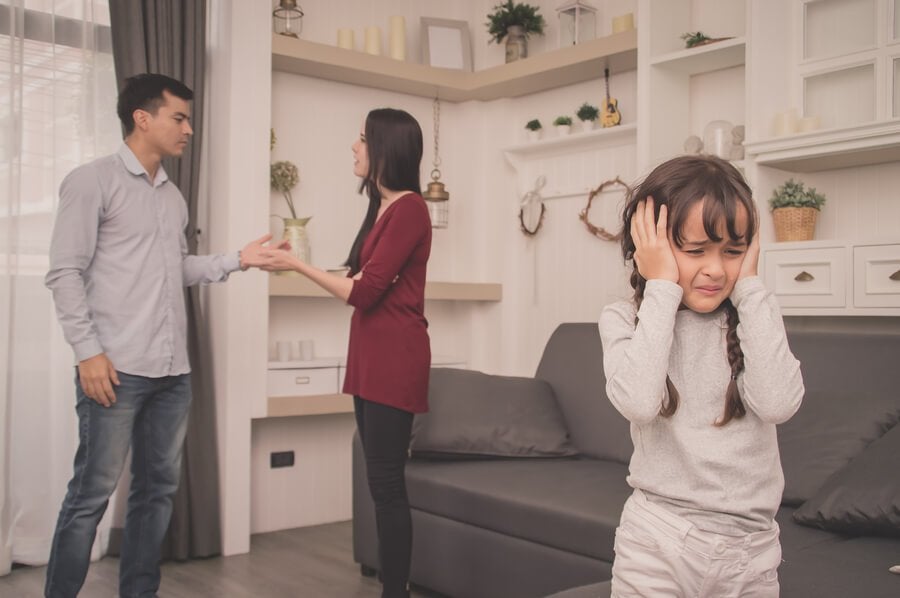 It’s normal for parents to disagree and argue from time to time. Sometimes, couples may not share the same opinion yet can still talk in a calm manner. But when this isn’t the case, remember: parents should argue away from their children.

Ideally, you’ll have a discussion in which both people have the opportunity to talk and listen to different points of view. However, there are many cases in which parents don’t agree and everything ends in an argument.

Children often worry when their parents argue, and this causes them to feel scared, sad or upset. Even when the discussion ends, they can hide a feeling of guilt.

Likewise, conflicts between parents can affect a child’s mental health and the development of their social and emotional skills, in addition to affecting academic performance and their ability to form future relationships.

In fact, a study has found that unresolved conflict between parents has a powerful influence on children‘s early development, mental health and the possibilities of their future life.

Why parents should argue away from their children

It’s not a good idea to argue in front of your children for the following reasons:

Arguments provoke a feeling of insecurity in children about the family’s stability. Children who are exposed to many fights may worry about divorce.

In addition, it can make it difficult for them to have a sense of normality with respect to the family because fights can happen for unpredictable reasons and at any time.

2. The parent-child relationship may be affected

Conflicts are stressful for children and, without a doubt, for parents too. A parent who suffers stress cannot spend quality time with his or her children. Meanwhile, it can also be difficult for them to show warmth and affection when they’re angry and upset.

Listening to frequent or intense discussions is not pleasant for children and results in stress. These situations can affect their physical and psychological well-being, as well as interfere with the child’s normal and healthy development.

Also, a study found that the stress associated with living in a high-conflict home can affect a child’s cognitive performance.

Researchers revealed that when parents frequently fight, children have more difficulty regulating their attention and emotions. In addition, their ability to solve problems effectively is also compromised.

The object of all discussion should not be triumph, but progress.

Parents should argue away from their children

Children often worry about the meaning of their parents’ arguments and the consequences that may result. This causes them to jump to conclusions and think that fights mean that their parents no longer love each other.

However, when parents argue it doesn’t mean they don’t love each other or that they want a divorce. Conflicts are usually just a way to let off steam when they’ve had a bad day or don’t share an opinion.

In fact, children of all ages can be affected by a conflict between parents. In general, the consequences appear through high levels of aggression, hostility and violence. Internally, they can show low levels of self-esteem, in addition to episodes of anxiety and depression.

How do children feel when their parents argue?

Generally, children feel upset when they see or hear their parents arguing. It is difficult for them to hear the shouting and unpleasant words. Similarly, seeing parents bewildered and out of control can make children feel unprotected and scared.

Little ones can worry about one of the parents during the discussion. Their concern is that you feel especially sad or hurt by the other party.

Sometimes parents’ arguments make children cry or cause them physical discomfort. For example, a stomachache caused by nerves may appear, or they may even have difficulty sleeping or concentrating at school.

Finally, remember that sometimes parents’ arguments can be healthy if they help people express their feelings to solve situations instead of keeping them bottled up.

Although we’re aware that it’s complicated, we must do as much as possible to try to argue away from our children, as it can certainly affect them emotionally.