Peter Pan Syndrome: When Children Refuse to Grow Up

Does your son or daughter refuse to outgrow certain behaviors from childhood? Does he or she have a hard time taking on responsibilities and depend on others for everything. If that's true, you may be looking at a case of Peter Pan syndrome. Learn more today. 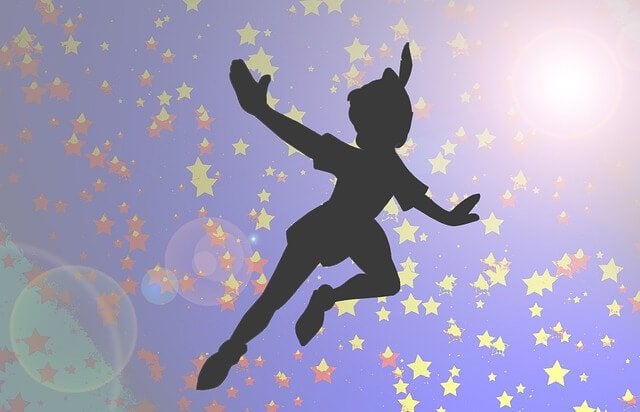 Have you ever heard of Peter Pan syndrome? It’s a term that refers to a person’s attempts to remain under parental protection and avoid the responsibilities that correspond to his or her age.

This syndrome isn’t an official psychological pathology. Rather, it falls into the category of a behavioral alteration and can occur consciously or unconsciously.

Those with Peter Pan syndrome display self-centered behavior and are inconsiderate. They’re only concerned about their own comfort and well-being.

American psychologist Dan Kiley coined the term “Peter Pan syndrome” in 1983. He explained the condition in his book The Peter Pan Syndrome: Men Who Have Never Grown Up.

Peter Pan is a fictitious character created by James Matthew Berrie. He’s a 10-year-old boy who doesn’t want to grow up and hates the adult world. With the help of his fairy, Tinkerbell, he encounters a world of adventures in the island of Neverland.

As we pointed out above, Peter Pan syndrome isn’t a psychological illness, but rather a specific behavior pattern. When speaking of fixation, Sigmund Freud detected very similar symptoms that impede a man’s normal evolution.

This syndrome is more common among boys. A world-renowned case of Peter Pan syndrome was that of the famous singer Michael Jackson.

Those who diagnosed him argued that he presented egocentric and narcissistic behaviors. At the same time, he had an excessive affinity towards Disney characters.

In fact, Jackson himself stated publicly that “I’m always Peter Pan in my heart.” He also created a music video that was identical to this famous fantasy story for his song Childhood.

How to detect Peter Pan syndrome?

Those who suffer from Peter Pan syndrome present the following behaviors:

In regards to the last point on the list, adults with Peter Pan syndrome often tend to fear rejection and loneliness. They worry that others won’t accept them or won’t understand them. Therefore, they make little to no effort in attempting to form relationships with others.

This way of thinking and behaving is counterproductive. Because they’re so closed off, they tend to isolate themselves and appear standoffish. As a result of this attitude, they don’t receive the care and affection they need.

Their behavior is often linked to much deeper symptoms and conditions, such as the following:

“This syndrome isn’t an official psychological pathology. Rather, it falls into the category of a behavioral alteration and can occur consciously or unconsciously.”

What causes Peter Pan syndrome and how is it treated?

One possible cause of Peter Pan syndrome is overprotection during childhood. This can cause an intense and unhealthy sensation of dependence on one’s parents.

As a result, older children have a very hard time overcoming childhood and facing adult responsibilities on their own.

At the same time, the motive for this sort of behavior can be an unhappy childhood. However, the individual idealizes his or her childhood and stays there – no matter how contradictory this may seem.

In extreme cases, an overly lacking childhood can trigger a desire to enjoy this stage at a time when it’s possible.

Finally, professionals also affirm that certain innate personality characteristics can contribute to Peter Pan syndrome. These traits aren’t necessarily responsible for the syndrome’s appearance, but rather help to maintain it.

It’s almost impossible for parents or other friends and family to try to deal with this issue on their own. Those who have Peter Pan syndrome often deny the existence of their inappropriate behaviors. This lack of acceptance really makes treatment complicated.

The most recommended option is to reach out to a professional. In general, the mechanisms that psychologists use to treat this childlike behavior are similar to those used to treat any other type of neurosis.

Is it possible to avoid Peter Pan syndrome?

The style that parents choose to raise their children has a great deal to do with preventing this behavior. It’s important that, from a young age, children take on responsibilities and face certain challenges on their own.

Parents should avoid solving everything for their children. Instead, they should provide support so that their children can learn to solve problems for themselves as they arise.

This way, they’ll be able to reach the mental maturity that each age demands. It’s key that parents combine a healthy amount of support with freedom and autonomy.