The Quest for Popularity During Adolescence

Children experience a number of changes as they go through puberty and adolescence. One of the main worries that many teens have is wanting to be "popular." In other words, they want to feel loved and admired by their friends, classmates, and others in general. 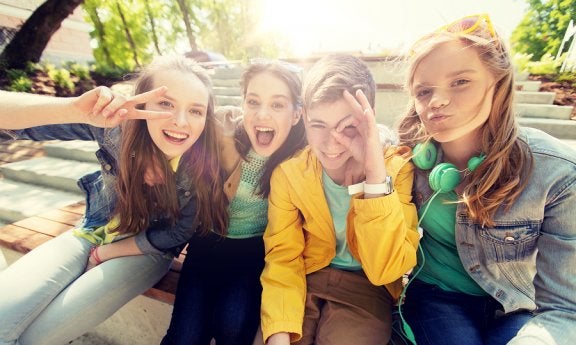 Teenagers must face a great deal of changes, both physical and emotional. Adolescence is a stage where nothing is simple and the opinions of others become extremely important. That’s why popularity during adolescence can be so important to teenagers.

To some degree or another, all teens yearn for the approval of their friends. Many will go to any length just to please their peers. Popularity becomes the center of their world.

In their quest to become popular, they use a variety of strategies. These include focusing on their physical appearance, developing social habits, and even having the latest technology.

However, in some cases, this obsession can turn into something dangerous. The extreme desire to have a lot of friends and obtain the most likes on social media can bring teens to adopt risky conduct and behavior.

What does popularity mean to adolescents?

Today, popularity during adolescence mainly means having lots of friends and feeling loved. However, the concept of “lots of friends” means something very different than what it did several years ago.

In the past, having a group of six or seven good friends was enough. Now, teens count their friends on social media by the thousands.

Adolescents can obtain popularity in various ways. Some teens are popular because they have good social skills, a good sense of humor, and good values.

Others, at the same time, are more sure of themselves, are good students or athletes, or have a good physique that others admire.

Teens who are popular have more power over the rest of the group. What they do or don’t do, how they dress and who their friends are influences the behavior of those around them.

The consequence of all of this is that a negative comment on social media about someone who is less popular can have a great impact.

“As long as popularity is based on intellectual, social and athletic abilities, it will be a positive motivation for youth”

Why is popularity during adolescence so important?

During adolescence, the opinion of others takes on extreme importance. Youth need to feel like they’re part of a group. Therefore, they have a strong desire to gain the approval of others.

Most teens seek out popularity during adolescence to feel more sure of themselves. It’s a fact that, during this stage of development, many teens experience feelings of insecurity – about their physical appearance, personality, economic status, etc.

To take away from this feeling that produces so many doubts, teens look for acceptance. They feel the need to have a lot of friends and good physical appearance.

Youth want to dress in clothes that are in style, fit in, and look like everyone else – or even set new trends. Their goal is for others to want to be like them – as someone who is popular and has influence over others.

The dangers of becoming obsessed with popularity

As long as popularity is based on intellectual, social and athletic abilities, it will be a positive motivation for youth. Having a lot of friends and learning how to interact with others will be useful in their future.

The problem is when popularity has mainly to do with one’s physical appearance and other superficial factors like a person’s clothing, or cell phone. This can lead to a number of problems. First of all, the relationships a person develops will be superficial and temporary.

Another problem is that teens may try to be someone they’re not just to gain acceptance. Some may even try to repress their emotions if they feel like they won’t be pleasing to others.

In the most extreme cases, these children may come to take on inappropriate behaviors that compromise their physical and emotional well-being.

Such is the case, for example, when it comes to exhibitionism on social media, or making fun of others in order to feel superior.

The role of parents

Parents can help their adolescent children better channel their insecurities and prevent their quest for popularity from getting out of control. This means reinforcing their self-esteem and helping them form healthy friendships.

Some hobbies, like sports teams or musical groups, are ideal for creating close friendships that have deeper bonds. Parents can also talk to their teens about the importance of caring for the relationships they have with their true friends.

The quest for popularity during adolescence shouldn’t mean giving up the friends who have been around all their lives. Rather, encourage your children to make friendships that will last a lifetime.

In conclusion, the concept of popularity during adolescence can be something quite positive and beneficial. However, there are also some risks involved that parents and teens must be aware of.