Did you know that restless leg syndrome severely affects between 2% and 3% of the global population of children? Learn more about this below. 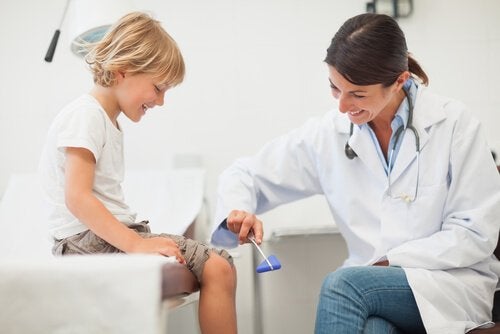 Have you ever heard of restless leg syndrome in children? If not, learn about it in today’s article.

Historically, restless leg syndrome was an illness that was thought to only affect adults older than 45 years of age.

The first case dates back to the year 1944: it appeared in three brothers of one, four and six years of age, respectively, who shared certain symptoms and features of this condition.

The next year, in 1945, Karl Ekbom was the first to describe this illness.

This syndrome is much more common than you might think, and that’s why it’s important to know the symptoms and causes in order to find the correct therapy in time.

Restless leg syndrome (RLS) is an illness that severely affects between 2% and 3% of the global population of children.

The symptoms of this syndrome tend to appear when the person is in a position of rest, either sitting or laying down. The affected describe experiencing differing uncomfortable sensations, like:

It’s important to note that these discomforts tend to lessen or even disappear completely when the affected person moves his/her legs.

These symptoms generally appear during inactivity. Long car rides, train rides or flights, going to the movies or simply laying down to rest can be enough for the person to start experiencing the symptoms mentioned above.

As a consequence, the rest is interrupted. As a matter of fact, RLS tends to be one of the main causes of insomnia in children and adults.

What are the causes of RLS in children?

The causes of restless leg syndrome in children, as with adults, are varied. An important genetic factor exists. As a matter of fact, family predisposition is one of the most important aspects for its diagnosis.

Approximately 80% of children diagnosed with RLS have one direct family member who suffers or has suffered from this illness.

Similarly, this syndrome can also be caused by an alteration in the neurotransmitters – in other words, a variation in the substances through which the neurons communicate.

Iron deficiency is also associated with RLS. Different studies have found that this mineral is of utmost importance for the healthy functioning of the neurotransmitters that are related to this syndrome.

Low iron levels favor the appearance of RLS in children and adults. Because of this, increasing the quantity of this nutrient can diminish this illness considerably. In some cases, it can even disappear.

What is the treatment for RLS in children?

Restless leg syndrome in children and adults tends to worsen after its initial appearances. Nevertheless, with an adequate diagnosis and regular treatment, the wellbeing of the patient can be cared for.

A blood test is necessary that indicates iron levels, among other things. RLS alters these levels in most cases. If this is the case, the doctor will prescribe some vitamin supplements.

Aside from the iron levels in the blood, it has been shown that making small changes in the patient’s daily routine can turn out to be helpful in the treatment of this illness. Also, daily exercise, especially during the afternoon, is very helpful.

The most recommended exercises for these cases are:

On the other hand, physical therapy can be very helpful in the treatment of RLS. Not only does it allow patients to work on their joints and muscles, but it also brings relief. This transforms into wellness in the long run.

Also, you can turn to other types of alternative therapies to help children relax and sleep better. The most effective tend to be baths with hot water before going to bed, massages for children and aromatherapy.

Of course, you can also consult with a pediatrician to see if he/she recommends turning to certain infusions (mint, pennyroyal, peppermint, chamomile) to relax children and help them get better sleep at night.