Specular writing in children is a very common disorder in the initial learning phase. We'll explain how to identify it and when to see a specialist. 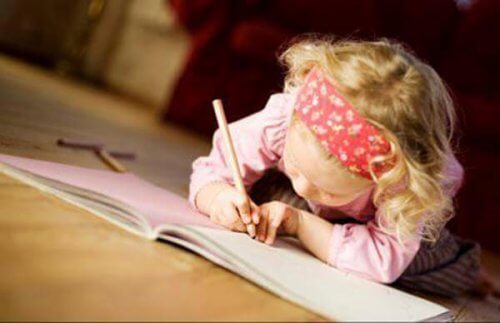 The concept of specular writing will probably sound unfamiliar to you. However, it’s something you see a lot more often than you might think. This type of writing consists of drawing letters in an inverted way, as if you were looking at them with a mirror.

The most common example of specular writing is that of ambulances. You’ll notice that the word ambulance is written backwards in front of the vehicle so that drivers who see it through the rear view mirror can read it and give way.

Specular writing is also frequent among children. When they start writing, it’s not uncommon for children to draw letters and numbers backwards.

Causes of Specular Writing in Children

We can distinguish two great causes of specular writing in children:

In a world where everything seems to be designed for right-handed people, we shouldn’t worry too much if left-handed children develop this form of writing. It’s simply natural for them, according to their way of seeing the world and carrying out certain actions.

Logically, this isn’t done deliberately. It’s just the way their brain tells them how to write. In fact, it would surely be very difficult for anyone to master this technique intentionally.

Specular writing usually happens between four and seven years of age. This period of life coincides with the time in which children develop the predominance of one hemisphere in the brain, happening between the ages of three and five. This determines laterality, whether the child is right or left handed.

Finally, we must take into account that at that age, the child is in the process of developing perception and motor skills. This means that the child may not yet be capable of recognizing all the shapes of letters or words; or maybe he or she identifies them, but cannot put them on paper.

Specular writing appears mostly in left-handed people which is why specialists claim that it’s due to the predominance of one hemisphere of the brain.

Are Dyslexia and Specular Writing Related?

Yes, they are, but up to a certain point. Specular writing is usually associated with children with dyslexia. However, it’s not an exclusive symptom of this disorder. It may be just a phase of learning and disappear afterwards.

What should be done when a child writes backwards?

Specular writing in children is normally not continuous and disappears after six years of age. If this isn’t the case, it’s advisable to consult a professional and rule out any relationship with other visual, cognitive or perceptive disorders.

Specular writing is associated with children with dyslexia, but it isn’t an exclusive symptom of this disorder.

There are some simple activities that parents can practice with children who have this problem. Here are a few:

Reading at an early age will also help children learn the letters of the alphabet and therefore, recognize their shapes and direction. This will also help them form healthy study habits, widen vocabulary and improve spelling.