Stereotypies in Childhood: What You Should Know

Stereotypies in childhood often manifest before the age of two and affect more boys than girls. 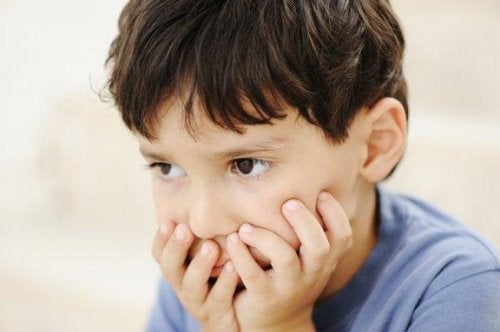 Stereotypies are basically repetitive movements that manifest in childhood. Among others, they may include simple movements such as body rocking, head nodding, and flapping and waving of the arms.

Stereotypies occur in children who are otherwise developing normally, which is why they shouldn’t be a cause for concern.

It’s a motor disorder that manifests in childhood and involves repetitive, purposeless movements. In fact, stereotypies in childhood usually manifest between the ages of two and five, although they may, unfortunately, persist through adolescence in some children.

Stereotypies are prolonged episodes of the same movements and generally manifest more often in boys than in girls. They don’t cause brain damage, and their exact cause as well as why they manifest in some children and not in others isn’t exactly known.

Generally speaking, they’re behaviors that the child can control, which are repetitive and have no functional purpose. Also, stereotypies can last from a few seconds to a few hours and can happen many times a day.

This condition usually doesn’t change throughout the child’s development and can improve without treatment as the child grows. They most commonly occur during car trips or while eating or watching TV.

Symptoms of stereotypies in childhood

These repetitive, purposeless movements are common in young children and don’t indicate a serious movement disorder. However, complex stereotypic movements are much less common and only occur in 3 to 4% of children.

Therefore, these repetitive movements vary widely and manifest in different ways in every child. Boredom, stress, excitement, or exhaustion can increase the repetitive movements. Some children might stop their movements if the attention is directed toward them or if they’re distracted. Others simply can’t control them.

Often, children with autism engage in stereotypies. In addition, motor stereotypies are usually diagnosed in people with intellectual disabilities and neurodevelopmental disorders. However, they can also manifest in children who are otherwise developing normally.

How to fight stereotypies in childhood

These movements usually manifest for the first time during the first three years of life. Although the cause of stereotypies is unknown, several factors have been linked to the development of this condition. In addition, certain medications can generate stereotyped movements, which usually disappear once the treatment is stopped.

Drugs aren’t generally prescribed to children with less severe forms of stereotypic movement disorders because the side effects may outweigh the benefits. Early diagnosis and treatment can yield better results.

As you’ve seen, motor stereotypies can affect young children and persist at least until adolescence. However, they can be treated with behavioral therapy and some medications.

In any case, you should keep in mind that most children respond well to self-help strategies and don’t require specific treatments, since stereotypies often disappear on their own.

However, if your child’s stereotypies interfere with his or her school performance, relationships with friends or everyday life, it will be necessary to resort to treatment to fight them.

Importance of Movement for Child Development
It's very important for parents to know the importance of movement for child development. It helps littles one grow healthily and acquire new skills. Read more »
Link copied!
Interesting Articles
Childhood behavior
My Child Is Afraid of Birds: What Do I Do?