5 Signs of Teenage Rebellion and How to Respond

Adolescence isn't just a difficult time for young people. It also presents a number of challenges for adults. Knowing the signs of teenage rebellion and how to respond to them will help you get through this stage. 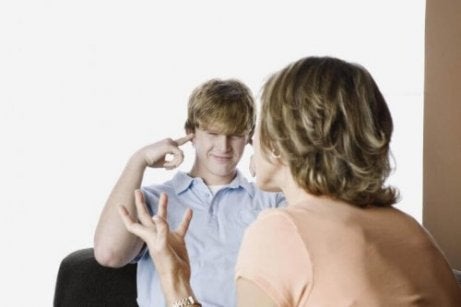 These signs don’t always appear as direct challenges to our authority. Rather they may start to appear more subtly as a result of emotional changes. Other influencing factors include a search for independence and typical psychological and physical changes in general.

It’s worth noting that the arrival of adolescence isn’t the same for everyone. For some children, it can appear around 8 or 9 years of age. For others, the beginning of this maturing process comes later on – even after age 13. Adolescence is the beginning of a number of transformations: physical, hormonal and psychological. The stage lasts until age 19, at least.

Today we’ll outline 5 signs of teenage rebellion. The information will help you recognize if your child has entered this stage, and also how you should respond.

As we mentioned above, the signs of teenage rebellion don’t always appear in the form of clearly defiant behavior. Rather, the signs may come on more discreetly as part of a process that leads to autonomy and adult personality construction.

Here are some of the signs of teenage rebellion you can look for:

1. Your child wants to be alone

This is one of the most typical signs of rebellion in adolescents and comes from a need for privacy. This is an aspect that becomes especially important during this stage of life.

Many parents mistake this behavior as a sign of some sort of problem in their child‘s life. Of course, it’s never a bad idea to make sure things are okay and that your child isn’t suffering any type of depression. More than likely, the best thing we can do when this behavior becomes habitual is give them the space they need.

Of course, things should be kept in balance. If your child’s alone time is distancing him from friends or affects his grades or eating habits, there might be cause for concern. In this case, the behavior may indicate that your child requires a bit more of your involvement.

This is also another very common sign of teenage rebellion. Mood swings are the result of hormonal changes that make adolescents more emotionally sensitive.

In this sense, your teen may respond indifferently to your displays of affection. Or she may react angrily in the face of an innocent joke. Adolescents can also become very upset about seemingly insignificant problems such as a pimple.

It’s important to handle these situations in a way that allows us to educate our child’s attitudes. However, this doesn’t mean being permissive regarding our children’s offenses. We need to maintain our authoritative role within the home.

Many children remain very attached to their parents until the arrival of adolescence. All of the sudden, parents may wonder why their children no longer tell them about their day at school. At the same time, they may develop new friendships that we don’t know about.

The fact that our adolescent children are less interested in talking to us is completely normal, as is the formation of new friendships. Many parents may feel a twinge of jealousy or abandonment in the face of this change. However, this is a healthy part of a child’s emotional development that will allow him to create his own identity.

Of course, teenage youth are more susceptible to diverse social problems during adolescence. These include, but aren’t limited to, substance abuse, delinquency and unplanned pregnancy. If you suspect any of these problems, then you should get involved in order to remove the effect of negative influences.

This is perhaps the characteristic of teenage rebellion that affects us most as parents, and that we understand the least. During this stage, adolescents are in the middle of a search for independence and identity as mature adults. This means leaving behind childlike behaviors and attachment to their parents.

Our teenage children will often display a sort of rejection towards our presence when they’re with their friends.

Something that we need to understand is that it doesn’t mean our children have stopped caring for us. It doesn’t imply a lack of respect or that our children suddenly hate us. Rather, it’s a reflection of a sort of insecurity. It makes them feel more uncomfortable around us because they can’t feign a certain level of maturity.

This sign is a very characteristic indication of the oncoming of adolescence, as well as a first sign of teenage rebellion. Our children are becoming more independent in all of their decisions. This manifests itself in a number of ways.

For example, perhaps your child used to accompany you to family gatherings without protest. Yet now, he or she seems reluctant to participate in activities that seem boring, tedious, or infantile.

It’s okay to let your child call some of the shots. What’s important is that you be reasonable. If your teenager doesn’t want to eat something, you don’t have to force him or her like you used to.

However, there are times when you will need to be firm in your authority and set limits. For example, your child can’t quit going to school just because he or she thinks it’s boring.