Home » Children » The Development of Sensorimotor Intelligence in Children

The Development of Sensorimotor Intelligence in Children 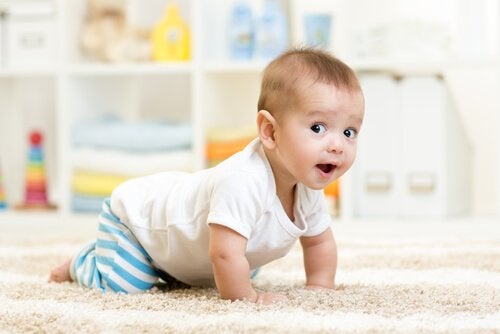 The Swiss psychologist Jean Piaget defined sensorimotor intelligence as one of the stages of child development. In this phase, babies begin to notice the world around them through their senses and movements.

What is sensorimotor intelligence?

Sensorimotor intelligence is one of the stages of child development that have been analyzed exhaustively in recent years. It plays a central role in the theory of development, which ultimately defines the infant’s cognitive development.

Piaget outlined four stages: sensorimotor, preoperational, concrete operational and formal operational. The sensorimotor stage occurs from the birth of the baby until he or she is two years of age.

During this period, children begin to become aware of the world around them. All their senses and movements evolve to develop knowledge and interact with the environment.

On many occasions, adults don’t give the necessary importance to this life stage. However, it’s important for them to know that extraordinary mental progress occurs during this particular cycle. It’s not for nothing that this is considered the first phase of cognitive development.

The development of sensorimotor intelligence

As explained above, sensorimotor intelligence develops from birth up to two years of age. During this period, the first habits without intentionality appear. That is, children still don’t perceive themselves as individuals within a group, but just themselves.

It’s also in this first phase when children begin to experiment with so-called circular actions. These are actions that babies do which are focused on their own body, and that’s why they’re considered primary.

One of the first circular actions that children develop is sucking. When they’re born, sucking their mother’s breast is a reflex. However, afterwards they begin to suck other objects such as their fingers, pacifier or even their toys.

Through this action, babies begin to create habits, and learn about textures and tastes. In other words, they’re also developing knowledge.

Senses, movements and emotions are the central elements of sensorimotor intelligence.

How is sensorimotor intelligence constructed?

This stage of development is constructed based on reflex. However, these aren’t simply repeated movements. On the contrary, babies acquire new reflexes and, as they do so, much broader elements. These allow for progressive differences.

Movements are key in this stage. In fact, when infants make an interesting movement, they usually repeat it, but always adding new elements. These movements, known as circular reaction, are fundamental for sensorimotor development.

It’s important to remember that, according to this author, intelligence appears much earlier than the ability to speak. Intentional behaviors are generated during this stage of life, as well as mental combinations, symbolic images and mental representations.

The importance of sensorimotor intelligence

This stage is, without a doubt, one of the most important bases of the sensorial, motor and intellectual development of human beings. During this phase of a child’s life, an evolution occurs until the baby develops an intentional behavior.

This type of behavior includes a transitive scheme and a mobile scheme. It’s essential that parents stimulate their children with exercises and games specially designed for this period.

Right from the beginning, babies will carry out reflexes to which they’ll later incorporate new elements. These will in turn bring new results, which will allow the baby to experiment and develop his or her intelligence.

This way the child progresses from a reflex movement like sucking to generating habits and relating to objects.

Sensory and motor intelligence are part of the development theory presented by the Swiss psychologist Jean Piaget. It’s the first of four stages which form cognitive intelligence.

“During the sensorimotor intelligence phases, an evolution occurs until the baby develops an intentional behavior”

We mustn’t forget that the first two years of life are essential for children’s optimal development. For this reason it’s very important that parents stimulate their children in the right way, and provide them with all the tools and elements to boost and develop their intelligence.