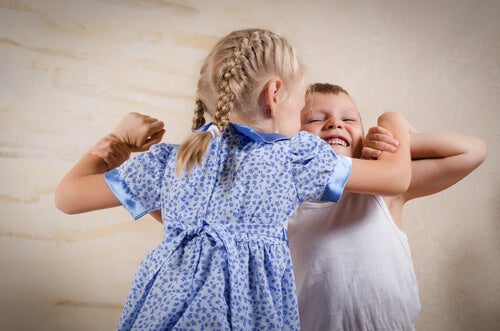 Sibling jealousy is a perfectly normal thing. In fact, jealousy among siblings is a classified phase of childhood development. It normally occurs when a new sibling is born and the older sibling is between two and five years old.

These symptoms tend to disappear, or gradually diminish as the older child adapts to the new arrival and starts to grow and learn new things.

However, your eldest may still be in the most sensitive stage of the process of adapting to a younger sibling. If so, it’s a good idea to heed the following advice:

Strengthen your bond with each of your children

Before your new baby arrives, make sure to talk openly and honestly with your eldest. Children understand more things than adults think.

In addition, it’s proven that homes with an open, communicative style of parenting, in which the children are treated equally, experience less sibling jealousy.

When there is a solid emotional parent-child bond before that new sibling’s birth, there is less risk of later conflict with the mother due to sibling jealousy.

Following the birth of a baby, it’s normal for small children to feel excited, and also to feel more nervous at night, making it harder to sleep.

If your child is still in the attachment stage, it may be that they need support because they may become less independent and less secure. Help the child at mealtime, spend time with them, and play together.

If you have a small child and he’s going through a phase like this, don’t assume it’s jealousy. Rather, understand that your child is very insightful and realizes that your attention is now being divided.

Ask your eldest to help take care of the newborn

Sometimes, kids are simply curious and want to participate in everything surrounding the arrival of their new sibling. For this reason, it’s a good idea to involve the older child in things related to the baby before the birth.

For example, when you’re pregnant, talk to the child about what it will be like to have a new sibling. Ask for their opinion on what color the room should be, or which name would be best. It’s very important that your older child consistently feels like an important member of the family.

And when the baby is born, invite your older child to participate in some of the chores related to the newborn’s care. It’s important that you spend time with them like you used to, but also that they realize that from now on their new sibling will occupy an important place in your lives.

Try not to compare the two siblings. Many perfectly innocent comments can make the older child feel bad and feed their sibling jealousy.

As they grow, learn to focus on the best of each child so that each will know what their good points are, and learn to define themselves healthily.

When a new baby arrives, the household routine will invariably change. The mother will have to look after the baby (and herself during a possible quarantine).

Consequently, it seems likely that the first days will be somewhat overwhelming for her. During this time, the father must attend to the needs of the older child.

This way, the child can turn to their father while the mother is occupied, which is positive. Not only does it strengthen the family bond, but the child can maintain their routine with the father’s support.

As a result, the child won’t feel disrupted in terms of their eating, sleeping, school, and bathing schedules.

The child can also enjoy the arrival of the new baby with their parents’ help. Treat your children equally, pay attention to both, and dedicate time to each.

Over time, you’ll realize that finding the time for the things that truly matter is easier than you think, even with a new baby in the house.